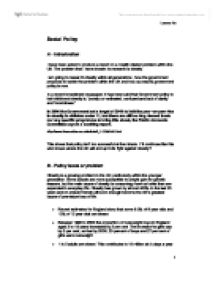 Social Policy A - Introduction I have been asked to produce a report on a health related problem within the UK. The problem that I have chosen to research is obesity. I am going to research obesity within all generations, how the government proposes to tackle the problem within the UK and how successful government policy is now. In a recent broadsheet newspaper, it has been said that Government policy to halt childhood obesity is, "poorly co-ordinated, confused and lack of clarity and forcefulness." In 2004 the Government set a target of 2010 to halt the year-on-year rise in obesity in children under 11, but there are still no ring-fenced funds nor any specific programme to bring this about, the Public Accounts Committee says in a scathing report. http://www.timesonline.co.uk/article/0,,2-2564349.html This shows that policy isn't too successful at the minute. If it continues like this who knows where the UK will end up in its fight against obesity? B - Policy Issue or problem Obesity is a growing problem in the UK, particularly within the younger generation. Some people are more susceptible to weight gain for genetic reasons, but the main cause of obesity is consuming more calories than are expended in everyday life. Obesity has grown by almost 400% in the last 25 years and on present trends will soon enough become the UK's greatest cause of premature loss of life. * Recent estimates for England show that some 8.5% of 6 year olds and 15% of 15 year olds are obese. * Between 1995 to 2000 the proportion of overweight boys in England aged 2 to 19 years increased by 2 per cent. ...read more.

* In Liverpool only two in ten adults are active enough to benefit their health, but eight in ten people in Liverpool think that they are * In the last 25 years the distance people walk or cycle has fallen by a quarter * Nearly one in four boys and one in three girls in Year 5 (aged 10-11 years) in Liverpool are overweight. * By 2020, at current rates, nearly one third of adults will be seriously overweight (obese) compared with 6% in 1980. Obese people have twice the risk of dying early as people of a normal weight. * The financial and social costs of this inactivity are very high. There are costs to employers in lost days off work, costs to the NHS in treatment and the cost to individuals and families in illness and disability. D - Research and Analysis Here I will present some research within my 2 reports that I chose to include in my assignment. The table above from the National Audit Office (NAO) shows the amount of fatalities that occurred due to obesity in 1998. The chart above shows the estimated cost to the Health Service, due to being obese. As you can see it shows that the top 3 disorders that cost the NHS the most are high blood pressure, heart disease and type 2 diabetes. How do we work out if people are obese? It's not a case of just looking at them. We use a chart called Body Mass Index (BMI). This takes into consideration your height and weight and gives you an outcome that is either good or bad. ...read more.

People's awareness of healthy eating has increased but will this help towards making the UK a healthier country? I will now list advantages and disadvantages of the current obesity policy. Advantages It is obvious what will happen if the Government finally take control of the obesity situation. People will live longer, the NHS will save huge amounts of money and in generally people will be healthier. But in the meanwhile there are a great amount of disadvantages while the Government plan what to do next. Disadvantages There are more people applying for weight loss surgery, therefore costing the NHS money that could be spent on things that are needed more in hospitals, there are without a doubt young girls starving themselves to look more like size 0 celebrities because the UK is so obsessed with weight issues, eating disorders are also on the rise. Many more people are developing heart disease and diabetes therefore cutting their life expectancy a great deal. When I look at the current news topic from a national broadsheet I wonder will the Government ever finally get a grip of the situation and turn it around. When reading that the policy is confused and poorly co-ordinated, it makes me think whether the Government is needed to cut out unhealthy eating and lack of exercise in the UK. The Government is obviously trying to help, but with a majority people in Liverpool who are obese on the "bread-line" will obesity ever become a thing of the past? Poverty plays a huge part in people being obese and whether the Government works on that as well, I don't think that they will ever be able to control the obesity issue. ...read more.