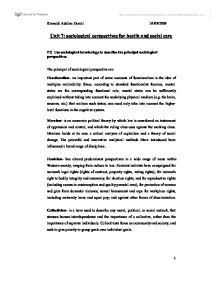 Sociological perspective for health and social care. Concepts of Health and Ill health.

Unit 7: sociological perspectives for health and social care P1) Use sociological terminology to describe the principal sociological perspectives. The principal of sociological perspective are: Functionalism- an important part of some accounts of functionalism is the idea of multiples realizability. Since, according to standard functionalist theories, mental states are the corresponding functional role, mental states can be sufficiently explained without taking into account the underlying physical medium (e.g. the brain, neurons, etc.) that realizes such states; one need only take into account the higher-level functions in the cognitive system. Marxism- is an economic political theory by which law is considered an instrument of oppression and control, and which the ruling class uses against the working class. Marxism holds at its core a critical analysis of capitalism and a theory of social change. The powerful and innovative analytical methods Marx introduced have influenced a broad range of disciplines. Feminism- has altered predominant perspectives in a wide range of areas within Western society, ranging from culture to law. Feminist activists have campaigned for women's legal rights (rights of contract, property rights, voting rights); for women's right to bodily integrity and autonomy, for abortion rights, and for reproductive rights (including access to contraception and quality prenatal care); for protection of women and girls from domestic violence, sexual harassment and rape for workplace rights, including maternity leave and equal pay; and against other forms of discrimination. Collectivism- is a term used to describe any moral, political, or social outlook, that stresses human interdependence and the importance of a collective, rather than the importance of separate individuals. Collectivists focus on community and society, and seek to give priority to group goals over individual goals. Interactionism- has become one of the dominant sociological perspectives in the world today. It is a theory based on social interaction, and it was first linked to the work of the German theorist Max Weber. ...read more.

Functionalism- means the society need to have all facilities to maintain holist concept of health in the community. It should be link with holism because functionalism says that for intellectual point of views we need to have education so people can be educated. In the society we need to have social club for people who are lone they need to have social club so they can not be isolated. Holism is link with functionalism because therefore in society we need to have schools, hospitals, social clubs and play ground so that people who doesn't have friend they could make friend in places like this that why functionalism says we need to have all the activities for people so they don't feel isolated. Holistic is a wellness approach that addresses the body, mind and spirit or the physical, emotional and spiritual aspects of an individual. Holistic concepts of health and fitness view achieving and maintaining good health as requiring more than just taking care of the various singular components that make up the physical body, additionally incorporating aspects such as emotional and spiritual well-being. Therefore functionalism talks about the facilities that we need to have in society such as education, hospital and on. Functionalism and holistic as a connection with both is it talks about the well-being of individuals in response to society. For example people in society need schools, so we can build our self -esteem and social club helps us to go out to meet new people everyday on our lives. Therefore many people they kill their selves because of being isolated at home without anyone to talk to. Marxism and positive health- Marx assumes the inevitability of the revolution of capitalist society into socialist society because of eventual discontent. The socialization of labor, in the growth of large-scale production, capitalist interest groups and organizations, as well as in the enormous increase in the dimensions and power of finance capital provides the principal material foundation for the unavoidable arrival of socialism. ...read more.

For a number of dimensions of health, rates in the poorest groups are particularly high, with the gradient flattening out among better-off groups. The chances of living in good health and without impairment are unequal. The chances are much higher for people in more advantaged circumstances than for those further down the socioeconomic steps. The social groups for whom life anticipation is shorter, and for whom infant mortality rates are higher, suffer poorer health than other groups because of inequalities in wealth and income. Poverty and continually low incomes are associated with poorer dangerous and insecure employment. For example inequalities in health exist, whether measured in terms of mortality, life expectancy or health status; whether categorised by socioeconomic measures or by ethnic group or gender. The poor lifestyle choices were linked to a range of chronic illnesses including heart disease, some forms of cancer, bronchitis and diabetes. Linking this to my M3 those who die youngest are people live on benefits or low wagers, in poor quality housing, and who eat cheap unhealthy food. The rate in class 5 unskilled manual workers is about twice that of class1. During my researching I come across of understanding that in addition to the health implications of higher levels of poverty, there are issues of access to the health service. In addition, a higher proportion of people from minority ethnic groups live in areas of deprivation in inner city areas with associated poor housing, pollution and relatively high unemployment it is therefore difficulty to know whether the poorer heath is due to poverty or ethnicity. to compare economic inequalities relating it to equal opportunities commission ( 2005) almost 30 years after the equal pay act made it illegal to pay women less for doing the same job, a pay gap of 18 per cent still exists between women and men working full time. http://wiki.answers.com/Q/What_is_the_holistic_concept_of_health http://en.wikipedia.org/wiki/World_Health_Organization http://wiki.answers.com/Q/Describe_the_different_concepts_of_ill_health http://www.archive.official-documents.co.uk/document/cm43/4386/4386-02.htm http://en.wikipedia.org/wiki/Marxian_Class_Theory http://wiki.answers.com/Q/How_does_the_biomedical_model_of_health_compare_to_the_social_model http://books.google.co.uk/books Kinvuidi Adelina Daniel 24/09/2009 1 ...read more.