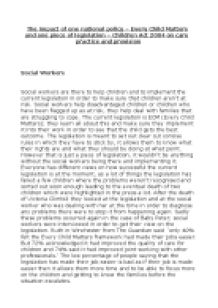 ﻿The impact of one national policy ? Every Child Matters and one piece of legislation ? Children Act 2004 on care practice and provision Social Workers Social workers are there to help children and to implement the current legislation in order to make sure that children aren?t at risk. Social workers help disadvantaged children or children who have been flagged up as at risk, they help deal with families that are struggling to cope. The current legislation is ECM (Every Child Matters); they learn all about this and make sure they implement it into their work in order to see that the child gets the best outcome. The legislation is meant to set out clear cut concise rules in which they have to stick by, it allows them to know what their rights are and what they should be doing at what point. However that is just a piece of legislation, it wouldn?t be anything without the social workers being there and implementing it. Everyone has different views on how successful the current legislation is at the moment, as a lot of things the legislation has failed a few children where the problems weren?t ...read more.

However they also say that they feel their jobs haven't got better at all as a result. No one seems to be publicly critisising the legislation as you never hear of any criticism. This is because this legislation has come from genuinly trying to learn from what has happened before and better it. ECM is based on values which a lot of people in children's services stick to, especially social workers. The values show the importance of listening and responding to children's views, focusing more on prevention, judging the success by the childrens outcomes and bringing services together to get what children need. The lesgislation is very optimistic, they belive that is can help make better lives for children and families through these services, it also focuses on the importance of every child reaching their full potential in life. Implementing ECM they say has been hard work and that it has taken a long time and a lot of energy to make the important changes to support it. They say that 2008 created a lot of anxiety for social workers in children's services and that 2009 didnt start well either, they reviewed what went wrong with the Baby P case and have set about trying to restructure the policys. ...read more.

But since Every Child Matters Janet has noticed a higher priority and that more attention is being given to how well children are achieving in school and to ensuring that they get help if they need it or want it. Rather than accepting that children have had difficult expreiences or have been in care they are being asked to make sure that a child does not suffer any more disadvantage. Although social workers have said that Every Child Matters has been good, for the frontline staff they have said that it can be difficult at some times. They say that Every Child Matters consists of a larger number of interrelated policies, its said that its hard for frontline staff to judge what part is responsible for what improvement. The person that has pointed out this problem also has many good points to say about it to, "I would agree there has been progress on working together," he says. "Relationships between police and social workers are generally good locally. And we now have a specialist nurse for looked-after children, which has definitely brought improvements. She can devote time to sorting out children's medical assessments, and dealing with problems when children are placed in other authorities. She's also available to offer advice, which helps." ...read more.

This essay aimed to examine the impact of the policy Every Child Matters (ECM) & the Children Act 2004. The writer appears to have some knowledge of the former – there is some relevant information regarding the case that led to its creation, but there is no evidence of knowledge regarding the Children Act 2004 as the essay does not mention this Act at all.
The essay does not adequately explain the impact of ECM. The writer states that there have been changes, but does not describe what these changes are. How exactly have organisation’s policies and procedures changed? How have Social Workers' roles changed? I would also add that it should be clear that ECM is a policy document and not legislation.
There is use of ‘they say’ which is not helpful as the reader will want to know who exactly is being referred to and so this type of language should be avoided. Make it clear who ‘they’ is/are. Use supporting references where possible.
2/5