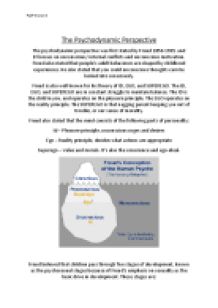 The Psychodynamic Perspective of development

﻿P2/P3 Unit 8 The Psychodynamic Perspective The psychodynamic perspective was first stated by Freud 1856-1939, and it focuses on unconscious/ internal conflicts and unconscious motivation. Freud also stated that people?s adult behaviours are shaped by childhood experiences. He also stated that you could unconscious thoughts cam be looked into consciously. Freud is also well known for his theory of ID, EGO, and SUPEREGO. The ID, EGO, and SUPEREGO are in constant struggle to maintain balance. The ID is the child in you, and operates on the pleasure principle. The EGO operates on the reality principle. The SUPEREGO is that nagging parent keeping you out of trouble, or our sense of morality. Freud also stated that the mind consists of the following parts of personality: Id ? Pleasure principle, unconscious urges and desires Ego ? Reality principle, decides what actions are appropriate Superego ? Value and morals. ...read more.

Stage 3) Phillac stage- This is formed between the ages of 3-5 years. Just like older male boys of this age can have erections during their sleep. Many children of this age become more aware of the changes to their body and begin to ask questions about their body parts. Stage 4) Latency stage- This occurs between 5 years of ages and puberty. The pleasure the individual receives through this stage is mainly contracted from secondary process thinking and energy is realised through new activities which normally involve school, hobbies and peers. Although they?re a number of problems that can occur during this stage too. Stage 5) Genital stage- this stage lasts from puberty onwards. This stage involves a major part of the teenage life this is detachment from parents. During this stage energy is released through adult sexuality. ...read more.

At all psychosexual stages Erikson claimed that the individual develops on three levels simultaneously: Biological, Social and Psychological. His model was a lifespan model of development, taking in 5 stages up to the age of 18 years and three further stages beyond, well into adulthood. Erikson suggests that there is still plenty of room for continued growth and development throughout one?s life. What ego mechanism is Gerald using when he blames others for his own behaviour? Explain how an understanding of ego defence mechanisms can be applied to understanding Gerald?s behaviour. Gerald is using the denial defence as a way of dealing with anxiety, he chooses not to believe what he is doing is wrong and blame other and carers for his own actions. He is also using displacement as if something doesn?t go right for him he trashes his bedroom which in the long run isn?t solving anything. ...read more.