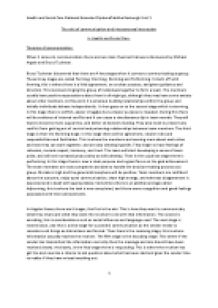 Transfer-Encoding: chunked ﻿Health and Social Care National Extended DiplomaTabitha Roxburgh Unit 1 The role of communication and interpersonal interaction in Health and Social Care. Theories of communication. When it comes to communication there are two main theories that were discovered by Michael Argyle and Bruce Tuckman. Bruce Tuckman discovered that there are 4 key stages when it comes to communicating as group. These 4 key stages are called Forming, Storming, Norming and Performing. It starts off with forming, this is where there is a little agreement, an unclear purpose, and given guidance and direction. This involves bringing the group of individuals together to form a team. The members usually have positive expectations about how it all might go, although they may have some anxiety about other members. At this point it is all about building relationships within the group and initially individuals behave independently. It then goes on to the second stage which is storming, in this stage there is conflict, power struggles but a clearer purpose is revealed. During this there will be evidence of internal conflict and it can cause a simultaneous dip in team morale. They will have to become more supportive, and better at decision-making. They also need to prevent any conflict from getting out of control and poisoning relationships between team members. The third stage is then the Norming stage. In this stage there will be agreement, clearer roles and responsibilities and facilitation. This is where the members are learning more about each other and how they can work together, and are also developing skills. They begin to have feelings of cohesion, mutual respect, harmony, and trust. The team will start developing a sense of team pride, and will see increased productivity as skills develop. Then in the usual last stage there is performing. In this stage there is now a clear purpose and a good focus on the goal achievement. ...read more.

It was only a brief chat as we don?t often use facebook as a method of contacting each other. A screenshot of our message can be seen to the right. A similar case to my text messaging happened here where I don?t tend to use a lot of slang. However we can see that Sam did by using ?u? instead of the full word ?you?. Using facebook meant it was convenient and we both could talk to each other almost instantly giving me an answer fairly quickly. In a health and social care setting social media wouldn?t necessarily be a direct form of communication between a service user and a professional however it can be used in the form of if someone isn?t feeling very happy and need help or advice and there?s no-one around then there may be online helplines or websites or even facebook groups that can help them gain access to these. It can also be used if a service user doesn?t have very many friends then a health care professional can introduce them to groups online that they may be able to confer with and gain information from to help them in whatever situation they may be in. Another form of communication is facial expressions and eye contact. This happened when me and a friend were in the gym the other day and decided we both wanted to be on different machines so she went on the bike while I went on the cross-trainer, fortunately we were both facing the mirror so this lead to us pulling faces at each other. At one point she locked eye contact with me and then kept looking up towards the TV, this told me to look at the song that was on and then when I looked back to her she was grinning and overexaggeratedly miming the words in a jokey manner. This made me chuckle and it was her way of telling me that she actually really likes this song. ...read more.

However, some aspects of an actual conversation were made. Audio clips could be used in a health and social care setting where by a social worker may be supporting someone who is blind and cannot easily text, or may not want to. Therefore they may prefer to converse using voice messages. It can also be used in ways where instead of sending someone an email or a letter, they will send the contents in an audio clip instead so that it may be accessible for those who are blind or visually impaired. How communication in a health and social care setting links to communication theories. In the first form of communication that I wrote about was the one that was in the form of talking and verbal speech was used. I had a conversation with my 5 year old nephew, Cole, and we spoke about a game called Minecraft. This can link to Argyles theory because in this case Cole was the sender and his aim was speak to me and show me how to use certain functions in a game. He decided that showing me would also be useful, and so he demonstrated the buttons to press and what they did, this was how he encoded his message. Next is transmission, I assume he clicked as I have a hearing impairment and that was what lead him to demonstrating it to me as well as talking. This meant that he thought about the distractions and formatting and adapted it to his receivers needs. In receiving and decoding he noticed I nodded my head, this indicated to him that I understood what he had said. I also said that I could see what he had done so he also knew that I had gotten what he was showing me. Finally in Responding he gave me the chance to have a go myself, this is where I did exactly what he had shown me and he knew that he had been successful in getting his message to me. ...read more.