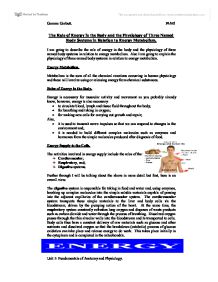 The Role of Energy in the Body and the Physiology of Three Named Body Systems in Relation to Energy Metabolism.

This is known as inspired, or inhaled, air. Expiration. The main force in expiration during quiet breathing is the elastic recoil of the fibres around the alveoli and the relaxation of the diaphragm. However, during exertion, more forcible expiration can occur with the assistance of the other set of intercostal muscles contracting to move the ribs downwards and inwards. The volume of the thorax decreases, the pressure increases above that of the environmental air and air rushes out. Normal ventilation rate is from 16 to 20 breaths per minute but this rises significantly during exertion. Below is a diagram of the process of breathing. Nervous impulses from the brain cause the diaphragm and intercostal muscles to contract Diaphragm flattens and the intercostal Volume of the chest increases, muscles cause the ribs to move upwards so the pressure inside the chest must and outwards decrease Surface tension between the pleura drags the lungs with the chest wall. As they expand, they fill with air Air containing oxygen rushes down the trachea and bronchi to equalise the pressure with the external environment - inhalation After a few seconds, the nervous impulses stop arriving and the elastic tissue in the lung causes recoil: the diaphragm rises and Volume of the chest the ribs lower decreases, so pressure increases, causing air to rush out of the trachea - exhalation The cycle repeats after a few minutes because the respiratory control centre Becomes active again, sending more nervous impulses. Gaseous Exchange. The composition of inspired air, which is the air around us, and that of expired air is shown in the table below: Component Inspired Air Expired Air Oxygen 20% 16% Nitrogen 80% 80% Carbon Dioxide Virtually 0% (0.04)% 4% Water Vapour Depends on Climate Saturated Although the largest component of air is nitrogen and this too passes into solution, it takes no part in the process of respiration. ...read more.

Salivary amylase prefers neutral or pH7 conditions. (Amylum is the Latin name for starch, so amylase works on starch.) o Relatively few molecules of enzymes are required to break down lots of large food molecules because they are catalysts. o Amylases work on cooked starch substrates (bread, rice, potatoes etc), converting the molecules to simple sugars like glucose. o Proteases act on proteins, breaking them down into amino acids and peptides (two amino acids joined together chemically). o Lipases convert lipids to fatty acids and glycerol. Source: Stretch B and Whitehouse M - BTEC National Health and Social Care Book 1 (Heinemann, 2007) Accessed - 10.09.2010. Energy. There are three systems which are involved in energy supply to the cells around the body; these are the cardiovascular, digestive and respiratory. Both the digestive and respiratory systems are important in the production of energy's main ingredients, glucose and oxygen; they make energy by cellular respiration. This is the process in which the chemical bonds of energy-rich molecules are converted into energy that can be used for life processes. The digestive system is responsible for consuming food and water, using enzymes, breaking up complex molecules into simple soluble materials that are capable of passing into the neighbouring capillaries of the cardiovascular system. The cardiovascular system then transports all these resources to the liver and body cells through the bloodstream, which happens because of the pumping action of the heart. As this is happening the respiratory system is persistently refreshing and reloading oxygen into the lungs, and disposing of carbon dioxide and water via the process of breathing. Dissolved oxygen passes through the lean alveolar walls in the lungs into the bloodstream and is transported to all the other cells in the body. This means that all body cells have a constant relief of glucose, oxygen and other raw materials so that the breakdown process of glucose oxidation (C6H12O6 + 6O2 � 6CO2 + 6H2O) can occur and release energy. This takes place in the cytoplasm and is completed in the mitochondria. ?? ?? ?? ?? Gemma Garbutt. P4/M1 Unit 5: Fundamentals of Anatomy and Physiology. ...read more.

This is an excellent essay that demonstrates a large amount of research and is written in a clear way. There are small areas that need amendments but they are minor on the whole.

The work could be enhanced by trying to link it all together a little more. It is an excellent essay as it stands though.