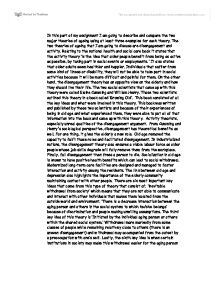 In this part of my assignment I am going to describe and compare the two major theories of ageing using at least three examples for each theory. The two theories of ageing that I am going to discuss are disengagement and activity. Relating to the national health and social care book it states that the activity theory 'is the idea that older people benefit from being as active as possible, by taking part in social events or employments.' It also states that older adults seem healthier and happier. Individuals that suffer from some kind of illness or disability, they will not be able to take part in social activities because it will be more difficult and painful for them. On the other hand, the disengagement theory has an opposite view on the elderly and how they should live their life. The two social scientists that came up with this theory were called Elaine Cumming and William Henry. Those two scientists outlined this theory in a book called 'Growing Old'. This book consisted of all the key ideas and what were involved in this theory. This book was written and published by these two scientists and because of their experiences of being in old age and what experienced them, they were able to put all of that information into the book and came up with this theory. Activity theorists, especially unreal qualities of the disengagement argument. From Cumming and Henry's sociological perspective, disengagement has theoretical benefits as well. For one thing, it gives the elderly a new role. ...read more.

These changes will then challenge the ideas that individuals hold about themselves. This may create a reduced sense of identity. For this reason people need to, and most actually do, engage in activities that develop substitute roles for those that have been abandoned. Hence, activities in late life are essential to restore one's self confidence and esteem and increase the sense of well-being. The activity theory has the following assumptions regarding this subject that are; there is an abrupt beginning of old age. The process of ageing leaves people alone. People should be encouraged to remain active and develop their own-age friends. Standards and expectations of middle age should be projected to older age. Ageing individuals should be encouraged to expand and be involved within the society and family life. There are many similarities and differences between the disengagement and activity theory. One of the differences between these two theories is that disengagement is against the health and well-being of older adults because this theory does not agree with older adults being associated with the society nor taking part in any kind of activities. But the activity theory is concerned about the health and well-being of older adults and encourages them to continue to live their life for example continuing their professional careers, able to participate in hobbies and interests and socialising with their family and friends. The activity theory takes into account every individual needs and feelings and tries to support them, whereas the disengagement theory does not take anything into consideration and just states everything that is against what the activity theorist believes. ...read more.

From about 4 o clock, Aston tends to go to the people's club that consists of old and ill people, to play bingo, cards and take part in many other social activities. This couple gives each other time, to themselves to go out and socialise with their own group of friends and have fun. This is an example from the activity theory because it states that older adult should be able to take part in many social activities and able to go out and do what they want. This couple are doing exactly what the activity theory discusses that improves their health and well-being. The last example I am going to discuss relating back the activity theory. A retired individual that lives on his own and love going out and meeting new people. Just down the road from where he lives, there is a children's club and weekly he goes and takes part in it by helping and supporting the teenagers and young adults that have some kind of problem with their life such as drugs or alcohol abuse. All the people that come to that particular club get along with him so well that he even calls them over to have tea or dinner. This individual is very happy and has a high self-esteem that lights up the people faces as he talks to them. This is an example of the activity theory because this individual loves socialising with many different people. Retirement has not stopped him going out and living his life. He loves all the children and people that go to that club like his own. ...read more.