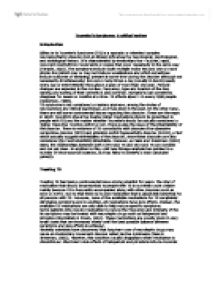 Tourette's Syndrome: A critical review Introduction Gilles de la Tourette's Syndrome (TS) is a sporadic or inherited complex neuropsychiatric disorder (not an illness) influenced by neurological, psychological, and sociological factors. It is characterized by involuntary tics - sudden, rapid, recurrent nonrhythmic movements or noises that occur repeatedly in the same way (Temple, 2003). The symptoms include: both multiple motor tics and one or more phonic tics (which may or may not include vocalizations and which sometimes include outbursts of swearing) present at some time during the disorder although not necessarily simultaneously; tics occur many times a day (usually in bouts) nearly every day or intermittently throughout a span of more than one year. Periodic changes are expected in the number, frequency, type and location of the tics; waxing and waning of their severity is also common. Symptoms can sometimes disappear for weeks or months at a time. TS affects about 1 in every 2000 people (Robertson, 1989). TS syndrome is not considered a mystery anymore, among the circles of neuroscience and clinical psychology, as it has been in the past. On the other hand, there are still some controversial issues regarding this disorder. These are the ways in which Tourette's should be treated (what medications should be prescribed to people with TS) and the matter whether Tourette's should be actually considered a Higher Executive Function deficit or not. There is also the issue of the inheritability of the disorder. ...read more.

Despite the fact that it has not been proven that psychotherapy on its own can totally eliminate tics, it is accepted that it can be beneficial to some TS patients who require treatment of the psychological consequences of this difficult disorder. The inability to control one's own body and even one's own thoughts, which is taken for granted by most people, often is a great source of anxiety, guilt, fear, helplessness, anger, and depression. Some patients react by withdrawal, others by aggression, and still others by perfectionism and excessive efforts to be in control (Cooper, Robertson & Livingston, 2003). Since virtually all TS patients are subjected to some form of negative social reactions, self-esteem problems are common. In addition, the person with TS experiences all the difficulties associated with growing up with a chronic illness. For those reasons rather than for the primary symptoms of TS, psychodynamic or supportive psychotherapeutic treatment may well be indicated (Wilhelm et al., 2002). TS, OCD, ADHD and their comorbidity. Can this suggest that TS is a Higher Executive deficit? TS is often accompanied by features associated with obsessive compulsive disorder (OCD), attention deficit hyperactivity disorder (ADHD), poor impulse control, and other behavioural problems. However, the relationships between both ADHD and TS and OCD and TS are complex and not yet clear. Evidence is accumulating that an association exists between OCD and TS. Coffey et al. ...read more.

Can a fine balance be adjusted between the benefits and side effects of each medication so as the patients will not have to confront with major problems caused not by the deficit but by the treatment itself? The complexity of this syndrome and also its comorbidity with other deficits has shown that there is still a lot that needs to be done in this area. Moreover, can psychotherapy and methods such us behaviour therapy and biofeedback be considered an answer to TS treatment. As it has been shown up to now, no matter how beneficial all these methods can be in the treatment of TS, they are still not the answer. Especially on severe TS cases, psychotherapy has proved to be helpless. Is TS a Higher Executive dysfunction after all or not? A lot of researches suggest that TS should be treated as a Higher Executive abnormality since children with this syndrome show poor performance on tasks concerning the SAS functions. Still, a lot of scientists argue that this is not the case, mainly because of the high comorbidity of TS and other Higher Executive dysfunctions such as OCD and ADHD. Finally there is the issue of TS inheritability. Most scientists agree on the fact that genes play an important role at the development of the disorder to a person. However, a lot more research is needed in order to specify the gene(s) which are responsible for TS. What is more, recent studies have not managed to limit down the number of candidate genes, but have actually managed instead to increase it. ...read more.