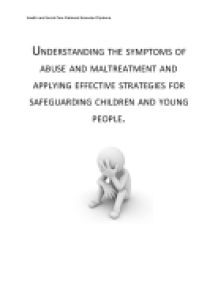 It may also be a cry for help to show people that something isn?t quite right. Struggle to control their emotions or frequently have extreme outbursts that seem to not have a reason. They may lack in social skills or not have as many friends because they may find it hard to do so or have been told things to prevent them from socialising effectively. Some children may play mind games with people, blackmail them or emotionally manipulate their relatives or peers. Some children may even abuse substances as a way of trying to receive help, get away from their home life or even as an act to harm themselves. C:\Users\Tabitha\Desktop\man yelling at child.png Emotional Abuse ? Long and short term effects As an effect of emotional abuse children can be at an increased risk of developing mental health problems. They may engage in self-harming, develop eating disorders and even suffer from depression and/or anxiety. This can then lead to more serious problems because if a child begins to feel this way for a long time they may also become suicidal and a risk to themselves. Another long term effect is that over time the child may actually become restricted in their ability to express and feel a full range of emotions appropriately, as well as being able to control them. ...read more.

In 2015 alone there were almost 26,000 counselling sessions where children went because of or about bullying. C:\Users\Tabitha\AppData\Local\Microsoft\Windows\INetCache\Content.Word\lots of blue people.png Intellectual Abuse ? Signs and Symptoms Signs and symptoms of intellectual abuse includes: Parent?s withholding their children from attending school. This can lead to a lack in basic math and english skills. That can then lead to a domino effect whereby that will cause them to struggle academically, and then left vulnerable to bullying by other children. Another sign could be a developmental delay in the child. They may not be at the same level of reading or be able to understand things that a typical child of their age should be able to know. Discrimination is another sign, a child may be subject to intellectual abuse if another person, adult or child, is purposefully rude or neglectful of a child due an intellectual disability. This can also be in reverse where a child can be picked on or called names for being ?too smart?. Labels can include ?nerd? and ?dork? and can come from anyone they may know, adult or not. The overall unauthorised absence rate for year 2014 alone in the UK resided at the following percentages: State-funded primary schools 1.9% State-funded secondary schools 5.3% SEN Schools 14.6% Intellectual Abuse ? Long and short term effects Response action 1 & 2 Response action 3 & 4 Reference list https://www.nspcc.org.uk/preventing-abuse/child-abuse-and-neglect/physical-abuse/signs-symptoms-effects/ http://www.nice.org.uk/guidance/CG89/chapter/1-Guidance#physical-features http://www.helpguide.org/articles/abuse/child-abuse-and-neglect.htm https://www.nspcc.org.uk/preventing-abuse/child-abuse-and-neglect/bullying-and-cyberbullying/ https://www.gov.uk/government/uploads/system/uploads/attachment_data/file/416343/SFR10_2015_text.pdf ...read more.