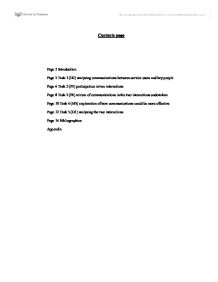 Contents page Page 2 Introduction Page 3 Task 1 (D2) analysing communications between service users and key people Page 6 Task 2 (P5) participation in two interactions Page 8 Task 3 (P6) review of communications in the two interactions undertaken Page 10 Task 4 (M3) explanation of how communications could be more effective Page 12 Task 5 (D1) analysing the two interactions Page 14 Bibliographies Appendix The following assessment is about communications in the work placement. There are five pass criteria's to this assessment, which consists of two passes, one merit and two distinctions. The assessment focuses on how communication skills are used and their effectiveness. Task 1 (D2) Analyse how communication in health and social care settings assists patient/service users and other key people. The following observations were done in a 70-bed residential care/nursing home with a separate EMI unit, which caters for the mentally ill. There are two floors, each one a mirror image of the other. On each floor there are 35 bedrooms, 20 in the main part and 15 in the EMI unit. There is a resident's lounge on each floor that has a conservatory on the end where the residents who smoke can sit. In each lounge there is a central fireplace, a television at one end and a display cabinet at the other end, which has a music system on it. There are approximately 20 reclining chairs in each lounge. I observed a care assistant as she went about her daily duties. I was sat in the resident's lounge talking to one of the residents. The lounge does get busy and can be quite hectic at times as care workers assist residents. There are also residents who come in and out to see what's going on along residents who have family visiting them. I was in the lounge talking to Mary (one of the residents) when Joan (another resident) ...read more.

One of the residents had quite a severe hearing impairment and so I had to use gestures such as simulating having a drink and dipping a biscuit in a cup. As I was giving each service user their requested drink and biscuit I did have to get quite close to most of them and should have been more aware about their personal space. I also assumed that each one spoke English, which is an assumption I should not have made. The room was very noisy as the television was on and another resident had the stereo on listening to music, also the trolley itself made quite a bit of noise when being pushed around. This environment was quite difficult to work in as all the noise made it both distracting and frustrating. Because of the lack of information such as just being told some residents had diabetes and some had their drinks served in special beakers it made the whole task very time consuming. If I had known the residents better then I would have been able to do the task quicker and more effectively. Also because some of the residents were diabetic I could have accidentally given sugar or a sugary biscuit to the wrong person, which could have been a health risk. The second interaction involved me feeding a resident their lunch in their own room. When I went into the room I had not been told that the resident was blind and was totally unprepared for the job. I had not fed a service user before who was blind and so had to think fast how I was going to approach the task. Because of the lack of information and therefore unprepared I could have done the job better. I did introduce myself on entering the room and once I realised the resident was blind I explained that I was there to give them their lunch. ...read more.

I also kept asking her if she needed to have a drink at regular intervals. Throughout this interaction I was opening and closing my own mouth whilst I was feeding the resident. This must be a natural thing to do as most people would do this and I have seen this happening when parents are feeding their young children. It must be a natural instinct to do what you want the other person to do in the hope that they will see what you are doing and copy you. Obviously this service user could not see me opening and closing my mouth so I had to verbalise what was required. I was standing up throughout this interaction, which made me feel uncomfortable, as even though the service user could not see me, I was very aware about standing over her and the empowerment issues that this raises. I was also very aware about the distance between us, and how close I had to get to her in order to perform this task successfully. Even tough the service user was blind, she would still have been very aware of how close I was to her as when one of the five senses is lost the others are heightened in order to compensate for its loss. Again, time was short and I was conscious that there were other residents to feed. This did not make me rush during this interaction, as it was simply a job that could not be rushed. The elements of facial expressions, and body language use by myself are in this case of little use as the service use was blind. However, the use of language such as tone of voice, and the speed of speech and the use of vivid descriptions are even more important in this case as the service user relies heavily on this element of interaction for her cues due to her loss of sight. ...read more.

This assignment is well written and covers P5, P6, M3, D1 and D2 of unit 1 on effective communication. Strengths of the assignment include the references to policies, codes of conduct and aims of the organisation, as well as some of the examples of analysis covered. Some suggestions have also been identified by the learner on how communication could have been improved within the two interactions. In places the assignment could be improved as is indicated, particularly with reference to the specific task (P6) on the effectiveness of the communication skills used, although it is noted that some of these are covered in other criteria and so, with cross referencing between tasks, P6 would be met. Analytical skills could also be improved where indicated.