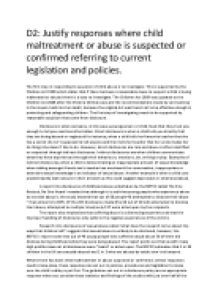 Unit 10: Caring for Children D2: Justify responses where child maltreatment or abuse is suspected or confirmed, referring to current legislation and policies.

﻿D2: Justify responses where child maltreatment or abuse is suspected or confirmed referring to current legislation and policies. The first step in responding to suspicion of child abuse is to investigate. This is supported by the Children Act 1989 which states that if there has been a reasonable cause to suspect a child is being maltreated or abused there is a duty to investigate. The Children Act 1989 was updated to the Children Act 2004 after the Victoria Climbie case and the recommendations made by Lord Laming in the inquiry held into her death, because the original Act was found not to be effective enough in protecting and safeguarding children. The first step of investigating needs to be supported by reasonable suspicion that come from disclosure. Disclosure is when someone, in this case a young person or child, feels that they trust you enough to tell you sensitive information. Direct disclosure is when a child tells you directly that they are being abused or neglected for instance; when a child tells her favourite teacher that she has a secret she isn?t supposed to tell anyone and then tells her teacher that her uncle makes her do things she doesn?t like to do. ...read more.

Showing emotions such as shock and anger can make the child feel like they have done the wrong thing in telling you, often children who are abused are told by their abuser that they will get in trouble if they tell anyone, if the child is being abused by a close family member such as a parent they may panic themselves realising by your show of emotion that their abuser will get into trouble. The second response is to believe the child, when looking at the NSPCC?s report about sexual abuse cases not being ?heard? or acted upon because the recipient of the disclosure didn?t believe them it is an appropriate response to not let your personal judgements affect a disclosure, just because you think that the child?s father who you thought was very educated, kind and a good parent at parent?s meetings could sexually abuse his daughter doesn?t mean he isn?t. All disclosures are to be taken seriously and follow the same procedures. The third response is to tell the child that they were right for telling you. This is justified by what I have previously explained about abusers telling children that they will get in trouble if they tell anyone in order to protect themselves, they make the child feel like they are doing something wrong that nobody can find out about. ...read more.

The Victoria Climbie case made clear that there was a necessity for those that work with children to be educated on how to identify abuse because there were so many social workers and healthcare professionals that saw Victoria while she was being abused, that treated horrific injuries on her that were the result of physical abuse such as scalds and burns on her face, bruising, lacerations and fractures and yet she still died at the hand of her abusers. The circumstances of her death horrified this country and everybody realised that things need to be done in order to prevent this from happening again. However, years later in the same borough of London another child died at the hand of his abusers. Seventeen-month-old Baby P suffered such horrible abuse whilst on the at-risk list for social services, his doctor failed to notice that he had a broken spine and eight broken ribs, that his fingernails had been torn off and that the infections he had on his scalp, hands and feet were the result of abuse. It is the deaths of these children that justify the responses to suspected or confirmed child maltreatment or abuse. ...read more.