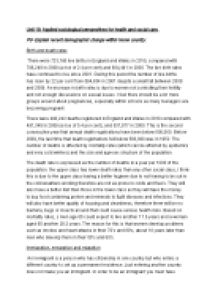 Jobs requiring heavy lifting and risky manual work have been replaced for comfortable office jobs, leading to less diseases and longer lives. Men age 65 could expect to live another 17.6 years and a woman aged 65 another 20.2 years. 30 years ago more than a quarter of men died before they were 65. M2- assess the impact of demographic changes within their home country. Implications of an ageing population The term ageing population relates to the elderly sector of a country?s population. Great Britain?s ageing population is increasing rapidly because of better health services and standards of living. This is bound to increase as the birth rates are increasing. The means that the overall population is growing. Ageing population is also having an effect in the UK on businesses and the government because of the increase of numbers. The percentage of elderly people (65 and over) have doubled to 17% in Britain within the last 50 years, and this figure will continue to rise to nearly 25% by 2040 (15million people). This becomes a problem because as people age they become more dependent on other for care. As many people live in till their 80?s 90?s in our days, many family?s cannot cope. ...read more.

By people immigrating into our country leaves people who live in the UK with less jobs also they will need to provide more staff on the health care board as more people are living in the country. If the information also provides life expectancy is rising they will need to look into proving more nursing homes as now people are tending to live longer, more bed within hospitals as they will have a bigger population of people. To help plan and target service they will assess the services that are less used and shut down places such as school which are not used or do not have enough children to allow it to run. They will also assess targets to provide more hospital beds. They also need to assess how effective the services that are in place are. They can also look at what the build of the service is like and if they service has had any complaints in the past. In order for the services to be effective they must be well used, have a good standard and not have any complaints. If the service is not effective there will be need for extra school. ...read more.