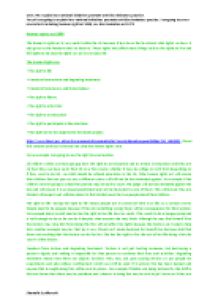 ﻿Unit 2 P4: Explain how national initiatives promote anti-discriminatory practice. For p4 I am going to explain how national initiatives promote anti-discriminatory practice. I am going to cover several acts including humans right act 1998, sex discrimination act 1975 Human rights act 1998 The human?s rights act is very useful within the UK because it lays down the law about what rights we have. It also gives us the freedom that we deserve. These rights may affect many things such as the rights to live and the rights to die also the rights we use in everyday life. The Human Rights are: ? The right to life ? Freedom from torture and degrading treatment ? Freedom from slavery and forced labour ? The right to liberty ? The right to a fair trial ? The right to an education ? The right to participate in free elections ? The right not to be subjected to the death penalty http://www.direct.gov.uk/en/Governmentcitizensandrights/Yourrightsandresponsibilities/DG_4002951 I fount this website useful as it showed me what the human rights were. For an example I am going to use the right to an education. All children within a certain age gap have the right to an education and to remain in education until they are 16 then they can have up to their 19 on a free course whether it may be college or sixth form depending on if they want to do bit., no child should be refused education in the Uk. ...read more.

This will not be fair on the young girl as she can be trained to learn this this is an example of indirect discrimination of age. To overcome this they could train her up until she is qualified enough to do this job or say to her can you start from the middle and work your way up. If she had the right qualifications then she will be able to do it from a lower position in the company. This is an example of indirect discrimination. Harassment: This could be where one or more people of an age group has effected someone?s dignity, leaving them humiliated or even intimidating them. This could vary depending on what they are doing such as calling them names, being violence towards them, pushing them or tripping them over, ganging up on them and bullying them, ignoring them, unnecessary jokes can be very hurtful and personal remarks such as your ugly or you smell. If someone is being harassed because of their age it will be discrimination. For example: if someone is being harassed by their boss or another colleague then the age discrimination act could come in play as this wouldn?t be fair to them. If they are being picked on as they are younger and have less experience the manager should put this right. This is an example of harassment. The age discrimination act has been put into place because they are trying to prevent discrimination, harassment and indirect discrimination by making it illegal to discriminate against people because of their age. ...read more.

For example the director in the play was discriminating against the gay man by telling him that it would be inappropriate for him to play the role. 3. This could be where a female student is being treated less favourable than the other students because she refused conduct that was unwanted and not needed. This conduct known as harassment when all sides of the allegation have been addressed. Another example may be if two was to go to court for totally different things, such as, one had committed burglary and another attack someone, then the court would have to give them both a fair trial and treated them the same no matter the offence they committed because everyone has the same rights and they have to all be treated the same with the same respect. Harassment Harassment takes many forms, from relatively mild sexual banter to actual physical violence. Employees may not always realise that their behaviour constitutes harassment, but they must recognise that what is acceptable to one person may not be acceptable to another. Harassment is unwanted behaviour of a sexual, racial or discriminatory nature by an employee towards another employee or service user. Examples of harassment include? 1. Words or actions likely to cause distress or offence to colleagues, service users or visitors. 2. Insensitive jokes and pranks. 3. Offensive comments about appearance, ethnic or religious background, or abilities. 4. Unnecessary body contact. 5. Displays of offensive material. 6. Speculation about a person?s private life and sexual activities. 7. Requests for sexual favours. 8. Threat of dismissal, loss of promotion for refusal of sexual favours. 9. Threatened or actual violence. 10. Deliberate exclusion from conversation. Shantelle Szulikowski ...read more.