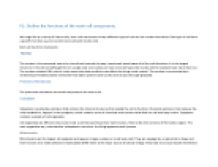 ﻿P1: Outline the functions of the main cell components. We begin life as a clump of 8 stem cells, stem cells can become many different types of cell and can renew themselves. Each type of cell have a specific function; e.g. nerve cells, bone cells and muscle cells. Each cell has three main parts: Nucleus The nucleus is the command centre for the cell and controls the way it works and coordinates all of the cells functions, it is the largest structure in the cell and although there is usually only one nucleus per cell, some cell types like muscle cells for example have more than one. The nucleus contains DNA, which is why some inherited conditions can affect the things nuclei control. The nucleus is surrounded by a selectively permeable plasma membrane that allows proteins and nucleic acids to pass through gradually. Protective Membrane The protective membrane surrounds and protects the entire cell. Cytoplasm Cytoplasm is a jelly-like substance that contains the internal structures that enable the cell to function. Chemical reactions, that make up the cells metabolism, happen in the cytoplasm, which contains a mix of chemicals and nutrients that feed the cell and keep it alive. ...read more.

P2: Outline the structure of the main tissues of the body. Tissue is a group of cells that are all of the same type, structure and function. There are four main types of tissue in the human body; epithelial tissue covers and lines various body structures e.g. the intestines, connective tissue is tough and fibrous and holds parts of the body together e.g. ligaments and tendons, muscular tissue is in all muscles including the heart and can contract producing movement and nervous tissue that is made up of neurons that conduct electrical impulses enabling communication to and from the brain. Epithelial Tissue Epithelial tissue acts as a barrier keeping different systems separate, there are two kinds. * Simple Squamous Epithelium is one layer of cells and can be found on the surface of lung alveoli. Ciliated epithelium tissue is a specialised form of simple squamous epithelium and can be found in the nose where its hair-like form cleans the air going into the nose. * Stratified Squamous Epithelium is layers of cells that are continuously replaced and can be found in the skin, mouth, tongue, oesophagus and vagina. Connective Tissues All connective tissues have a structural role in the body. ...read more.

is found in tubular organs, glands, bronchioles, the reproductive system and the gut. This muscle tissue controls the movement of substances along the tubes. * Cardiac muscles are found in the heart and generate their own contractions ,which is known as myogenic, that occur rapidly. An inherited condition that effects the skeletal (striated) muscle tissues is Duchenne Muscular Dystrophy (DMD), it causes the muscle tissues to weaken, mainly the proximal muscles which are the hips and shoulders, making movement and mobility increasingly more difficult as the sufferer ages. The muscle cells contain a chemical protein called dystrophin which is necessary for muscles to function properly, when people inherit the faulty gene that is in charge of making dystrophin their muscles can?t function properly and the condition progresses as muscle tissue is damaged. An inherited disease that effects cardiac muscles is Hypertrophic Cardiomyopathy (HCM). A mutation or change in the DNA means that the cells of the heart muscle become irregular and disordered causing the muscle wall of the heart to become thickened which could lead to arrhythmias, heart block or endocarditis. Nervous Tissue Nervous tissue contains elongated cells that sends electrical impulses to and from the brain. It?s function is to control and coordinate the body. When a person becomes paralysed because of an accident or injury it is because they have damaged nerve tissue and their nerve cells can?t communicate to the brain. ...read more.