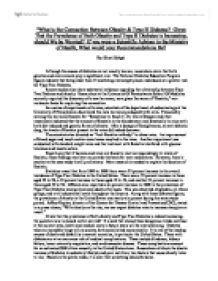 &quot;What is the Connection Between Obesity &amp; Type II Diabetes? Given That the Prevalence of Both Obesity and Type II Diabetes is Increasing, should We be Worried? If you were a Scientific Advisor to the Ministry of Health, What would your Recommendations B

"What is the Connection Between Obesity & Type II Diabetes? Given That the Prevalence of Both Obesity and Type II Diabetes is Increasing, should We be Worried? If you were a Scientific Advisor to the Ministry of Health, What would your Recommendations Be? By: Shruti Sehgal Although the causes of diabetes are not exactly known, researchers claim that both genetics and environment play a significant role. The National Diabetes Education Program figures indicate that being older than 45 and being overweight places individuals at a greater risk for Type Two Diabetes. Recent studies also show substantial evidence regarding the relationship between Type Two Diabetes and obesity. Researchers at the University Of Pennsylvania School Of Medicine currently reported the discovery of a new hormone, now given the name of "Resistin," as a molecular basis for exploring this connection. ...read more.

Based on the points made, it is clear that something should be done. It is more important than ever for people to examine lifestyle factors that can place them at risk for Type Two Diabetes. Frank Vinicor, director of the CDC's diabetes program explains that, "maintaining healthy behavior such as controlling weight through nutrition and physical activity can help ease the burden of diabetes, and may actually prevent its onset." If I were a scientific advisor to the Ministry of Health, I would make recommendations. I would advise the department to administer campaigns and programs to promote public awareness of new discoveries and scientific evidence of the connection. These programs would also provide information regarding general weight loss, exercise tips, and maintaining healthier lifestyles. Promotions and advertisements would also help to encourage people. Obesity and Diabetes are both recognized diseases and it is vital that we help prevent them in anyway that we can. ...read more.