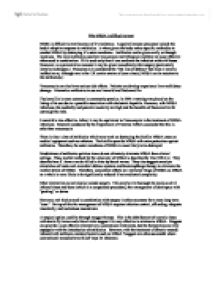 Why MRSA is difficult to treat.

Why MRSA is difficult to treat MRSA is difficult to treat because of it's resistance. Acquired immune processes include the body's adaptive response to antibiotics. ie when given the body makes specific antibodies to combat MRSA by destroying it's outer membrane. Antibiotics can be given orally or through injections. The main antibiotics used are vancomycin and rifampicin and they are most effective when used in combination. If it's used early then it can eradicate the infection within 48 hours. Moreover, as a preventative measure it may be given immediately after surgery (particularly invasive techniques.) Vancomycin is considered the "last line of defence" but alone it may be ineffective as, although rare in the UK certain strains of (non-classic) MRSA can be resistant to the antibiotic(s.) Vancomycin can also have serious side effects. ...read more.

The biofilm provide MRSA with extra protection against antibiotics. Therefore, the outer membrane of MRSA is more likely to be destroyed. Modulations of antibiotics policies alone do not ultimately eliminate MRSA from clinical settings. Thus, another method for the cytoxicity of MRSA is described by Von Eiff et al. They describe how S. Aureus can be killed in vitro by shock-waves. They also suggest osmolyte stimulation of innate anti-microbial defence systems and bacteriophhage therapy to eliminate the weaker strains of MRSA. Therefore, concentrate efforts on a narrower range of MRSA so MRSA as a whole is more likely to be significantly reduced if not eradicated completely. Other alternatives to anti-biotics include surgery. This may be via thorough the excision of all infected tissue and bone (which is a compulsory procedure,) ...read more.

Additional alternatives include creams and shampoos may also be used. This may be for pets as well as the patient, because domestic animals may carry the MRSA in their coats and transmit it to those who are vulnerable. New research has found a compound that occurs naturally in garlic called allicin and this has been developed into a cream for people with MRSA. It is highly effective against MRSA and can be applied to the skin and nostrils. A new nasal spray has also been developed. It contains phages which when sprayed in the nose or even work surfaces kill MRSA. Assuming the infection is around a sore, further alternatives to antibiotics include draining the sore. The Government has emphasised that hospitals should use less antibiotics to limit the opportunity for bacteria to develop resistance (opportunistic.) ...read more.

This is a good essay that looks at ways to treat MRSA. However, it is very technical and some of the language is beyond that which would be expected at this level of writing.

It is correct but I think it would benefit from being simplified so that the writer could show that they understand what they are writing. It could also be enhanced by including some history of MRSA and why it is such a problem.