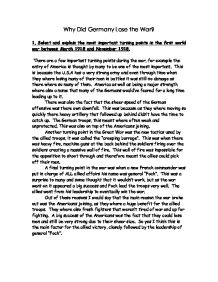 1, Select and explain the most important turning points in the first world war between March 1918 and November 1918.

Why Did Germany Lose the War? 1, Select and explain the most important turning points in the first world war between March 1918 and November 1918. There are a few important turning points during the war, for example the entry of America is thought by many to be one of the most important. This is because the U.S.A has a very strong army and even through time when they where losing many of their men in battles it was still no damage as there where so many of them. America as well as being a major strength where also a name that many of the Germans would've feared for a long time leading up to it. There was also the fact that the sheer speed of the German offensive was there own downfall. This was because as they where moving so quickly there heavy artillery that followed up behind didn't have the time to catch up. The German troops, this meant where often weak and unprotected. This was also on top of the Americans joining. Another turning point in the Great War was the new tactics used by the allied troops, it was called the "creeping barrage". This was when there was heavy fire, machine guns at the back behind the soldiers firing over the soldiers creating a massive wall of fire. ...read more.

Riots and fighting on the German streets went on in protest of the Kaiser, this also will get to the front-line troops and gain would not exactly the feel-good factor they needed at such a crucial time in the war. It would've got the German soldiers thinking that even if they won the war was there anything worth going back to. They would have been thinking that if they didn't win the war and if they did they still might have got a lot of stick because of being in the Kaisers control. The internal pressures of the war played a part on the result because if the front-line soldiers heard about problems at home then they may not try as hard when fighting, then if you have a minority that aren't putting effort in then you would not stand as much chance. 3, What was more important in the defeat of Germany, the failure of the Spring Offensive or the intervention of the U.S.A? Explain your answer. These are two major factors in the Germans defeat. The first is directly linked to them as it was their last push and the second is to do with the allied side and the Americans joining to help the allied fight. The spring offensive was the Germans last attempt to win the war before the U.S.A joined. ...read more.

These two factors are though extremely hard to compare to each other. The one is all about joining the war and creating a difference in the way it turned out, and the other is all about a failure and how that made the run of the war change. The failure of the spring offensive though doesn't seem anywhere near as important as the Americans intervention because the Germans where turned from the stronger position to the very weakest position just by the intervention of the U.S.A. Overall I think that the Americans intervention was much the stronger case because they game into this war not exactly brilliant tactically but large enough to enter the war and still be able to lose men and do the job that they did. I think the case for the Americans is much stronger than that of the spring offensive because there was always the threat the Americans would join the war during the spring offensive and out a halt to that anyway. The intervention of the U.S.A also brought in new technology and new men that would easily finish the job. As the Kaiser could see that the Germans where so weak with the Americans so strong he made a half-hearted attempt to postpone the war while he could get some new soldiers trained and the older ones fit again. This alone sums up the strength and importance of the Americans upon the war. By Tom Essex Word count: 1,350 ...read more.