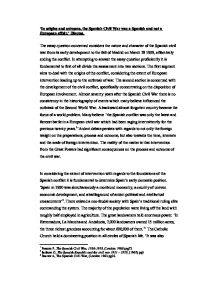 &amp;#145;In origins andoutcome, the Spanish Civil War was a Spanish and not a European affair&amp;#146; - Discuss.

'In origins and outcome, the Spanish Civil War was a Spanish and not a European affair.' Discuss. The essay question concerned considers the nature and character of the Spanish civil war from its early development to the fall of Madrid on March 28 1938, effectively ending the conflict. In attempting to answer the essay question proficiently it is fundamental to first of all divide the assessment into two sections. The first segment aims to deal with the origins of the conflict, considering the extent of European intervention leading up to the outbreak of war. The second section is concerned with the development of the civil conflict, specifically concentrating on the disposition of European involvement. Almost seventy years after the Spanish Civil War there is no consistency in the historiography of events which many believe influenced the outbreak of the Second World War. A backward almost forgotten country became the focus of a world problem. Many believe 'the Spanish conflict was only the latest and fiercest battle in a European civil war which had been raging intermittently for the previous twenty years.1'Ardent debate persists with regards to not only the foreign weight on the preparations, process and outcome, but also towards the time, interests and the scale of foreign intervention. The reality of the matter is that intervention from the Great Powers had significant consequences on the process and outcome of the civil war. In considering the extent of intervention with regards to the foundations of the Spanish conflict it is fundamental to determine Spain's early domestic position. 'Spain in 1930 was simultaneously a moribund monarchy, a country of uneven economic development, and a battleground of ardent political and intellectual crosscurrents'2. There existed a neo-feudal society with Spain's traditional ruling elite commanding the system. The majority of the population were living off the land with roughly half employed in agriculture. The great landowners held enormous power. ...read more.

Soon after conflict broke out in Spain, Italy was sending Franco troops in addition to material, and Italian submarines began attacking neutral shipping in the Mediterranean.8 8. Whealey. Hitler and Spain, 9-14. Germany also used the Spanish war as a chance to improve its image with the democracies. Because the Spanish Communist Party was a prominent part of the Republican coalition, and because the Soviet Union became the only nation to give outright support to the Republicans, the Germans used their Propaganda Ministry at full force to pose as the 'defenders of Western civilization' against the Communists.9 9. Robert H. Whealey, "Nazi Propagandist Joseph Goebbels Looks at the Spanish Civil War." The Historian, Volume 61, no. 2 (1999): 348. Italy represents the second foreign power, which supported the Nationalists. Ever since 1922 Italy had been ruled by the fascist government headed by Benito Mussolini, who created a totalitarian state. Independent from Germany, Italy decided to intervene in the Spanish affair on 28 July 1936. Apart from economic interests, it was scared of a spread in communism, like its German precursor. The intervention later enabled him a better relation to the German 'Fuehrer' and established the axis Berlin-Rome[9]. However, furthermore, Mussolini was driven by the idea of a 'mare nostro', which meant the extension of the Italian control and influence of the Mediterranean and hoped to get at least military bases on the Balearic Islands. This is the main reason why Italy supported Franco even more with weapons, soldiers and planes than any other state. CARR Mussolini - resented both Fr & Sp popular govts as they stressed an anti-fascist crusade. 9 Italian savoias reached Sp Morocco on 29 July. 22 August expanded senting 200 Italian troops Italy Policy was dominated by what she saw as the restless desire to redress what she as the injustices of the Versailles treaty. The defeat of Spanish nationalism would be a defeat for what he saw as a sister movement. ...read more.

Pg 80 It was Italo-German arms shipments to the nationalist that obliged him to provide support for the republic. Finally, I want to mention the international brigades. Anti-fascist movements and strong support emerged in numerous countries. That resulted in the forming of international brigades that fought on the side of the Republic. Brigades like the Thaelmann, Garibaldi, Lincoln and Marseillaise Brigades were recruited of German, Italian, Irish, French, Russian, American and Baltic fighters[14]. 'In a decade of worldwide depression and spreading fascism, the revolution in Spain signalled a message of renewed hope to the scattered forces of working-class emancipation throughout the globe'[15]. Many people saw in the Republic the last hope to repel the fascists. 'Approximately 35,000 anti-fascists from fifty-two countries joined the student, unemployed, union, and cultural movements that were influenced by the Communist Party'[16]. In conclusion, the origin of the Spanish Civil War was definitely an internal affair. The civil war was the consequence of the deep polarisation in the population between the capitalists and the working class. However, the process was massively influenced by previous mentioned European powers. Without the massive fascist support of Germany and Italy, Franco would not have been able to win the war and establish his fascist regime. Hitler enabled him to start his coup properly in providing transport planes to circumvent the sea blockade. At latest with the outbreak of the 2nd World War, the British and French appeasement policy proved as unprecedented failure. In refusing the intervention of the Spanish Civil War, they lost a chance to limit Hitler's power and discourage the fascist movement. Contrary to this, the French confiscated Russian material deliveries for the Republic. The communist counter-measures to undermine the anarchistic revolution emerged as a kind of disillusionment and division in the republican area, what weakened the anti-fascist movement. All this together led to following conclusion 'The effects of the neutrality of the United States, Britain, and France combined with the fascist support of Germany and Italy proved disastrous to the Spanish Republic'[18]. ...read more.