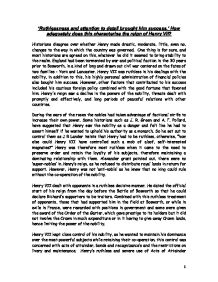 &amp;#145;Ruthlessness and attention to detail brought him success&amp;#146; - How adequately does this characterise the reign of HenryVII?

'Ruthlessness and attention to detail brought him success.' How adequately does this characterise the reign of Henry VII? Historians disagree over whether Henry made drastic, moderate, little, even no, changes to the way in which the country was governed. One thing is for sure, and most historians are agreed on this, whatever he did it seemed to bring stability to the realm. England had been tormented by war and political faction in the 30 years prior to Bosworth, in a kind of long and drawn out civil war centered on the fates of two families - York and Lancaster. Henry VII was ruthless in his dealings with the nobility, in addition to this, his highly personal administration of financial policies also bought him success. However, other factors that contributed to his success included his cautious foreign policy combined with the good fortune that favored him. Henry's reign saw a decline in the powers of the nobility, threats dealt with promptly and effectively, and long periods of peaceful relations with other countries. During the wars of the roses the nobles had taken advantage of factional strife to increase their own power. Some historians such as J. R. Green and A. F. Pollard, have suggested that Henry saw the nobility as a danger and felt like he had to assert himself if he wanted to uphold his authority as a monarch. ...read more.

By keeping the nobles at a distance and imposing heavy penalties on those who were unwilling to match to his pattern of behaviour, Henry ensured that the factions never threatened his rule. Henry succeeded in controlling the nobility by creating few new peerages, thereby limiting their numbers. He also enforced laws against retaining firmly without fear or favour. In spite of his harshness, Henry still made good use of the nobility to help him rule at both local and national level. Henry made a significant impact in government through his personal interest in financial administration. He appreciated that his financial strength would weaken political rivals and enable him to keep a firmer grip on the aristocracy. The most significant source of revenue was the royal estates. Henry was also keen to emphasise his own power as king by asserting his feudal rights over the nobility. Henry also raised revenue from his position as feudal overlord. It has been estimated that the income from royal lands and ward ship went up during his reign by 45 %, from an annual average of �29 000 to �42 000. Unlike Edward IV, Henry made few grants of land to political supporters. The remaining revenue came mainly from parliament, which granted Henry customs duties for life. As all revenue was arranged to go directly into the chamber, money was then immediately available for royal use. ...read more.

In all these ways, Henry VII seems to conform to the pattern of a 'new monarch' and the battle of Bosworth can be held to signal the beginning of a new era in English history. Several historians have gone further to question whether such ruthless methods were really necessary in order for Henry to be successful and whether the English nobility had the capacity to challenge the king's authority. Lander believes that the political behaviour of the nobility was relatively good, and J.A.F. Thomson has stressed the damage done to the great feudal families as a result of henry's ruthlessness in bringing them under his control. Christine Carpenter goes further, and in her view, Henry VIII, with his total inexperience of English politics, failed to understand, and so failed to exploit, those relationships with the nobility by which his predecessors government, and by which they gained control of the localities. However, in conclusion, Henry VII was a successful king. In 1485, the country he ruled was financially, diplomatically and internally weak. However, by his death in 1509, his personal attention to detail meant that the crown was financially solvent. Also Henry's ruthlessness towards the nobility kept them under his control through legal terrorisation and the dread of financial ruin. He also left his son a country which was not at war as a result of his cautious foreign policy, was not racked by faction, that was more centralized in its administration than ever before, and which was respected by a number of major European powers. ...read more.