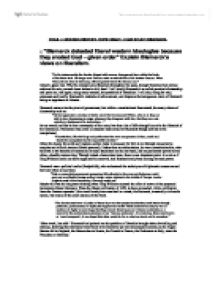 YEAR 11 MODERN HISTORY, TOPIC ESSAY - CASE STUDY BISMARCK. 2. "Bismarck detested liberal western ideologies because they eroded God - given order" Explain Bismarck's views on liberalism. "By his statesmanship the frontier fringed with cannon, disappeared from within the limits of the father land. No longer now German seeks to take the life of his brother German. What Bismarck has done to Germany, still one greater had to the human race." Indeed a great man. Why the constant anti-liberalism throughout his years, though liberalism had almost achieved his aim, several times before he did, then? I will justify Bismarck's so called practical-dictatorship and point out, and agree, using many extracts, the problems of liberalism. I will also, along the way, exonerate and justify, Bismarck's methods of achievement, and disprove the bourgeoisie claim of Bismarck being an oppressor or dictator. Bismarck came to be the pivot of government, but within a constitutional framework, the many claims of dictatorship such as: "He had appointed a ministry of clerks out of the Government Offices, who do as ...read more.

Bismarck was a political realist (Realpolitik), who understood the techniques of diplomatic maneuver and how and when to use force. "Only a monarchial government possessing full authority to the army and diplomacy could carry out an effective foreign policy, being a nation situated in the middle of Europe. Insular England could afford democracy; Germany could not" Maybe this was the long term thinking when King Wilhelm rejected the offer of crown of the proposed democratic-liberal Germany. Were the liberal unification of 1850, to have succeeded, with a unification from the 'bottom upwards', this would surely have resulted in a weak, disillusioned, eventually civil-strife nation, like many of the small nations of the Bund. "The fundamental error of policy of those days was that people fancied they could attain through publicists, parliamentary or diplomatic hypocrisies results which could be had only by war or readiness to fight; in such shape, that they seemed forced upon our virtuous moderation as a reward for the oratical demonstrations of our 'German sentiment'. ...read more.

I agree that Prussia had become the destined nation to unify Germany, (as Wilhelm once said, we were born betrothed to Germany's unity). Of Austro-Hungary's 36million people, ONLY 6million were German, while of Prussia's 16million, 14 were German, who sounds like they are interested in benefiting the German unity? Austria had no right to lead the Confederacy into unity, as they were a multicultural, aristocratic, worn, racially strifed, Jewish state, that was purely bourgeois (not the Marxist defined 'bourgeoisie'). I disagree that Germany's unifying completely, was just Prussian expansionism. Prussia (Bismarck) led, having proved with his seldom yet powerfully military might, yet with often diplomatic restraint, rescuing not only Prussian militarism (dwindling because of the constant revolutionary activities), but "Perpetuated that subaltern spirit in German public life that was its natural concomitant." Bismarck restored complete nationalism saving the smaller states from the slow-down, inefficiency and deceit of complete democratic-liberalism, of which not even the USA had yet mastered, and after having proved its success, installed an autocratic but perpetual constitution, king and (military) tradition, that would make Germany one of the leading economical and military world powers in the next half century. ...read more.