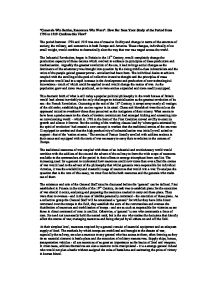 "Generals Win Battles, Resources Win Wars". How Far Does Your Study of the Period from 1792 to 1919 Confirm this View? The period between 1792 and 1919 was one of massive fluidity and change in terms of the structure of society, the military, and economics in both Europe and America. These changes, individually of no small weight, would combine to dramatically alter the way that war was waged across the world. The Industrial Revolution, begun in Britain in the 18th Century, would completely change the production capacity of those nations which evolved to embrace its principles of mass production and mechanisation. Arguably the greatest revolution of the era, it lead to huge social changes as the dominance of the aristocracy was brought into question by the rising middle-class industrialists and the voice of the people gained greater power - socialism had been born. The individual desire to achieve coupled with the swelling of the pool of collective inventive thought and the principles of mass production would lead to a rapid increase in the development and production of new technological innovations - much of which could be applied to and would change the nature of war. As the population grew and more was produced, so to were armies expanded and more readily equipped. This dramatic birth of what is still today a popular political philosophy in the work houses of Britain would lead almost inevitably to the only challenger to industrialisation as the greatest revolution of its era - the French Revolution. Occurring at the end of the 18th Century, it swept away nearly all vestiges of the old order, establishing the ancien regime in its stead. Chaos and bloodshed were the rule as the oppressed united to overthrow those they perceived as the instigators of their misery. What seems to have been a predecessor to the ideals of modern communism had emerged kicking and screaming into an unwelcoming world - which in 1792 in the form of the First Coalition moved swiftly to stem its growth and silence it forever. ...read more.

That said however, the American conflict makes it clear that"...logistics impinge on the warmaking even of the most care taking and talented general." Surrounded as the Confederates were on all sides and bereft of sustainable industry and resources, this sad fact would bring about the end of Lee and Southern dreams of independence. What is evident from Lee's early victories is that "...logistic supremacy rarely wins a campaign against a determined enemy..." unless accompanied by an appropriately skilled commander. Lee was able to take advantage of this fact, and drive the more numerous yet poorly lead Unionist forces almost to submission in his counter-invasion of 1862. However, when quality of generals began to equalise with the arrival of Meade, Sherman and Grant in the Northern ranks the tide of war was turned inextricably against the southerners who now faced a large, better-equipped and equally well lead force, which would begin an overwhelming spiral of defeat after defeat that proves well the adage that whilst a general will win battles, resources will eventually win a war. The factor of time is of the essence here, the American conflict clearly demonstrating that the longer a war was waged the more likely it was that the adequately supplied would triumph - regardless of the commanders involved. Following the difficulties experienced by both the French and British during the Napoleonic conflicts, it seems inconceivable that a more effective method of transportation would not have been developed for supplying soldiers in the field prior to the advent of the railway. Yet Crimea is the embodiment of a conflict where commanders did not learn from past experiences, despite the fact that all those involved had seen service in the Napoleonic Wars some forty years earlier, and should have learnt from Russia that mismanagement of resources leads to disaster. Napoleon learned through his own unsuitable and inflexible tactics that, much to his detriment, "...few commanders...could campaign outside their home territories with a freedom unconstrained by logistical consideration..." ...read more.

The railway, and the general staff that came with it, would be instrumental in changing the role of generals and resources in war to such an extent that responsibility for victory fell more heavily on the former, but yet relied more stringently on the latter. The Great War is quite possibly the best example of a pre-planned war in European history, and is also a clear example of a war won "...not by any discovery or application of new military technique by the high commands, but by the relentless attrition of manpower by industrial output." It was a war of resources, fought by resources in a variety of forms, and won by resources. That those resources were directed in battle by commanders shows that resources still needed direction, or stalemates such as those at Verdun would ensue, but is also firmly backs the hypothesis that whilst generals will win battles "...it was supply and logistics...which ensured victory...." in war. Warfare throughout the period under study has clearly been a thing of change, but one theme has remained intact throughout - the conflicting role of resources and generals in the winning of battles and wars. The fact that it commonly takes a good general to win both confuses the issue, with the campaigns of both Napoleon and Lee supporting the view that generals can and will win battles without the supposedly necessary resources, but the eventual defeat of each also epitomises the fact that war cannot be made sustainable in a manner that leads to victory without adequate resources. The logistical skills and ability to inspire troops that were and remain the role of the general, when compared with the ability to wage war provided by resources, makes it fair to conclude that battles cannot be won without skilled generals, but that the final victory which success in battle represents cannot be achieved without proper logistical support and presence, handled by an able commander. ...read more.