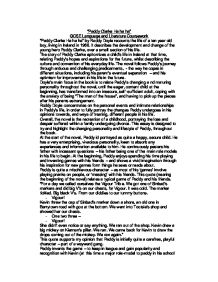 "Paddy Clarke Ha ha ha" GCSE Language and Literature Coursework "Paddy Clarke Ha ha ha" by Roddy Doyle recounts the life of a ten year old boy, living in Ireland in 1968. It describes the development and change of the young hero Paddy Clarke, over a small section of his life. The story of Paddy Clarke epitomizes a child's life in Ireland at that time, relating Paddy's hopes and aspirations for the future, whilst describing the culture and convention of his everyday life. The novel follows Paddy's journey through arduous and challenging predicaments, - the way he copes in different situations, including his parent's eventual separation - and his optimism for improvement in his life in the future. Doyle's main focus in the book is to relate Paddy's changing and maturing personality throughout the novel, until the eager, content child at the beginning, has transformed into an insecure, self-sufficient adult, coping with the anxiety of being "The man of the house", and having to pick up the pieces after his parents estrangement. Roddy Doyle concentrates on the personal events and intimate relationships in Paddy's life, in order to fully portray the changes Paddy undergoes in his opinions towards, and ways of treating, different people in his life. Overall, the novel is the recreation of a childhood, portraying the loss and despair suffered within a family undergoing divorce. This essay is designed to try and highlight the changing personality and lifestyle of Paddy, throughout the book. At the start of the novel, Paddy id portrayed as quite a happy, secure child. He has a very enterprising, vivacious personality, keen to absorb any experiences and information available to him. He continuously pesters his father with incessant questions - his father being one of the main role models in his life to begin. At the beginning, Paddy enjoys spending his time playing and inventing games with his friends - and shows a vivid imagination through his inspiration for new games form things he sees or reads about. ...read more.

Throughout the book as Paddy matures and his opinions change towards his Da, he loses some of the childhood admiration he once had towards him. P.151 Da's impatient side comes through and Paddy actually rejects his father - conflicting to the way in which he treated him and was in awe of him at the beginning of the book. Paddy seems to want independence now - rather than help and support, which reflects his maturing character. "That made him more annoyed. - You're not trying. He pulled the bike away from me. ......... I didn't need him now. I didn't want him. He was gone anyway. Back into the house. -You'll be grand now, he said. He was just lazy." Paddy again, is perceptive as to what his father's real motives are - and knows and understands his Da too well to be deceived. This deep knowledge of his father's temperament is reflected again by Paddy later on in the book - P.202. "He was good sometimes and useless others and sometimes you could tell that you couldn't go near him to ask him or tell him anything. He didn't like being distracted; he said that word a lot, but I knew what it meant, Distracted, and I didn't know he was being distracted because he wasn't doing anything anyway. I didn't mind, only sometimes." This shows how Paddy resents the lack of attention his father pays him - he did mind sometimes - showing how his Da hurts Paddy. Paddy's father also confuses Paddy with his temperamental nature, and I think towards the end of the book especially this loses him a lot of Paddy's respect. Paddy begins to doubt his father and recognise the selfish reasons behind why he is not treating Paddy and the other children with due love and attention. "He had to get his energy back at the weekend. ...read more.

Paddy has to prepare himself for the inevitable heartbreak of his parent's separation, and Kevin does nothing to help the situation for him. This shows Kevin's unreliability (P.187) and Paddy's realisation of this "No one had jumped in for me when Charles Leavy had been going to kill me; It took me a while to get used to that, to make it make sense. The quiet, the waiting. All of them looking. Kevin standing beside Sean Whelan. Looking." Paddy also wants to escape the pain that would come to him when his father would eventually leave them - and distances himself from him also. Paddy searches for fault in his father and sides with his mother towards the end of the book in attempt to help and protect her. Paddy then puts all his energy's into following Charles Leavy, who he substitutes to overtake both the roles of Kevin and his Da in the book. The other factors to have helped Paddy's fluctuations throughout the novel, is his increasingly diminishing territory. As the new corporation houses are erected, Paddy and his friends find their territory is literally decreasing, and being taken over by the new corporation people (such as Sean Whelan and Charles Leavy). The boys consequently find they have to share their territory, or 'hang out' elsewhere. Paddy's territory is also decreasing throughout the novel in his home. As his parents fight downstairs, Paddy is confined to the landing, listening to the incessant arguments. Paddy's territory is further decreased when he falls out with Kevin. Paddy no longer has access to certain places outside his home, as Kevin wouldn't let him anywhere near their old gang's lad. In the end, paddy is eventually confined to the hot press - the only place in the house where he can feel safe, away from everything, alone. The hot press was the only place Paddy could find to escape his parents' constant arguments, and the conflict with his friends. Doyle uses the darkness in the hot-press to create an intense, cold atmosphere around Paddy. ...read more.