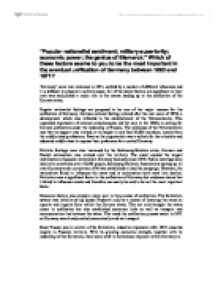 &amp;#147;Popular nationalist sentiment; military superiority; economic power; the genius of Bismarck.&amp;#148; Which of these factors seems to you to be the most important in the eventual unification of Germany between 1863 and 1871?

"Popular nationalist sentiment; military superiority; economic power; the genius of Bismarck." Which of these factors seems to you to be the most important in the eventual unification of Germany between 1863 and 1871? 'Germany' came into existence in 1871, unified by a number of different influences and it is difficult to pinpoint a solitary cause. All of the above factors are significant in their own way and played a major role in the events leading up to the unification of the German states. Popular nationalist feelings are proposed to be one of the major reasons for the unification of Germany. German national feeling revived after the war scare of 1859, a development which was reflected in the establishment of the Nationalverein. This organised expression of national consciousness led the way in the 1860s in calling for German unification under the leadership of Prussia. The weakness of the Nationalverein was that its support was limited; at its height it only had 25,000 members, mostly from the middle class professions. ...read more.

However, France and Austria were also notably expanding economically therefore economic strength alone does not explain the victories of Prussia's armies in those wars. This suggests that there was in fact something distinct about the Prussian army, as the wars of 1864, 1866 and 1870-1 all resulted in decisive victories. The victories were not due to the Prussian army out numbering the French forces or the Danish army but organisation and planning. The Prussian Chief of Staff, Von Moltke, made a major contribution to Prussia's military victories through the preparation and planning which he had instigated since the early 1860s. The technological gap between the Prussian army and its adversaries also played a part in the victories. On particular importance in this context was the quality of the weaponry deployed by the respective armies. Prussia had introduced the breech-loading Dreyse gun in 1843 when other armies were still using the musket. They also used artillery with rifled barrels, which had far larger range and accuracy. ...read more.

The war of 1866, with Austria left the Prussian Empire stronger than ever, in hindsight it seems that the war was in fact planned step by step by Bismarck and he was successful in this policy. The new balance of power in Europe made the French vary and this led to diplomatic tensions. War with France was the final step on the road to German unification. Bismarck exploited the tensions between the two powers to arouse national feeling in Germany and to persuade the southern states to accept closer military co-operation with Prussia. To conclude all of the above elements are important in their own ways, all of which are inter-linked to create the conditions of 1871 for the states of Germany to unite under the leadership of Prussia. The weaknesses of the other states of Germany and the unconcern of the rest of Europe also played an important role. However, the economic and military strength of Prussia was the most significant reason for German unification and without Prussia's strength a German state could not have been achieved. ...read more.