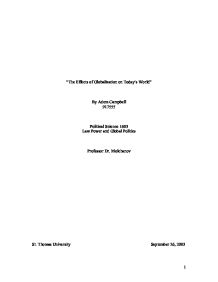 "The Effects of Globalization on Today's World" By Adem Campbell 917555 Political Science 1603 Law Power and Global Politics Professor Dr. Molchanov St. Thomas University September 26, 2003 The world we live in is much smaller then that of past generations. With the advancement of technology and with our ability to pass information on so easily, borders and geographical boundaries are no longer an obstacle. The Cold War had countries choosing a side and only trading and dealing with those who they were aligned with. Now countries can freely and easily deal with one another through new methods of trade brought to us by technology. ...read more.

Terms like Mother Earth and Spaceship Earth truly make sense. At an instant we can communicate to whom ever we wish. The paper that I am embarking on will try and show how globalization is the new way in which the world works. I will also try and discover what effects globalization has had on democracy in its current state and as well will touch on the spread of democracy through globalization. Will democracy in fact be strengthened by its growth or will its growth only dilute its strength and global influence? One is certain that the course of globalization has been set for the most part by the United States. ...read more.

Our present course is very uncertain. War clouds now loom over once again another Middle Eastern nation. As America sets it sights on Iran, will there be another day in infamy like September the 11th. This paper will search for answers as to what direction terrorism will take. Will it lose its strength from American intervention or will it only become more powerful as the US chooses yet another enemy? Are we witnessing American colonialism, or is it simply the United States setting the world straight? Religion as well has greatly been affected from globalization. Globalization, because of its American flavour has been seen as a means of spreading not only democracy and American ideals but also Christianity. Many Muslim states have feared such events. With George W. ...read more.