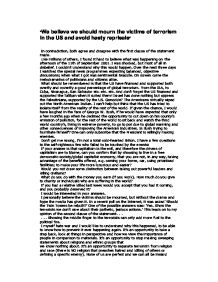 &amp;#147;We believe we should mourn the victims of terrorism in the US and avoid hasty reprisals&amp;#148;

"We believe we should mourn the victims of terrorism in the US and avoid hasty reprisals" In contradiction, both agree and disagree with the first clause of the statement made. Like millions of others, I found it hard to believe what was happening on the afternoon of the 11th of September 2001. I was shocked, but most of all in disbelief. I couldn't understand why this would happen. Over the next three days I watched the special news programmes expecting balanced, objective discussions; when what I got was sentimental twaddle. On screen come the melodramatics of politicians and citizens alike. What should be remembered is that the US have financed and supported both overtly and covertly a good percentage of global terrorism. From the IRA, to Cuba, Nicaragua, San Salvador etc. etc. etc. And don't forget the US financed and supported the Taliban when it suited them! Israel has done nothing but oppress the Palestinians, supported by the US. Genocide? The Americans virtually wiped out the North American Indian. I can't help but think that the US has tried to isolate itself from the reality of the rest of the world. ...read more.

This leads on to my opinion of the second clause of the statement. . . . . . Showing the middle finger to the terrorists can only add more fuel to the political fire. I myself hate war and I would like to understand why this happened, to be able to know how to prevent it ever happening again. It's an opportunity to take a step back, look at things in perspective and how we view the importance of people in comparison to materials. It's an opportunity to stop making sweeping statements about religions and ethnic groups that we know nothing about. It's an opportunity to separate terrorism from religion and race (there is NO religion that preaches hatred and killing of others or defining a specific enemy). None of us are perfect and we can all be inward looking and selfish in our societies. We should also appreciate that political, religious and media propaganda is extremely powerful and can easily distort the truth and shape our views depending on where we are from. This is an easy opportunity to label, hate and make the world an even more dangerous place to live in. ...read more.

Compassion and hate are opposites. But hate always tells lies and pretends to have compassion behind it. The terrorist hate in the name of Allah and the Christians hate in the name of Jesus. That is the lie. It is hypocrisy. I have also noticed that those who call for war and death always speak briefly and in slogans. That shows he unreasoning of anger and hatred. But what is really sick is the pretence to feel compassion for those whom one never had a care for beforehand. Someone actually said they cared for nobody but their friends and family. That was honest, but it is no help in a situation like this. The fact is we are responsible for one another whether or not we wish to be. Anger deludes and blinds and leads to destruction of the person who follows it. That is said in many scriptures from many religions and has been known all down the ages. It is a terribly hard direction to follow, but it is the right one - the only one that will put an end to the cycle of hatred and revenge. It is the direction that requires courage, intelligence and a capacity to stop and reflect and look into the causes of things. ...read more.