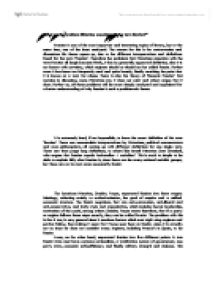 "What are the problems Historians associate with the term Fascism?" Fascism is one of the most important and interesting topics of history, but at the same time, one of the least analysed. The reason for this is the controversies and discussions this theme opens up, due to the different interpretations and definitions found for the term 'Fascism'. Therefore the problems that Historians associate with the term Fascism all begin because firstly, it has no generally approved definition, also it is not known with certainty, which regimes should or should not be called fascist. Further more it has been too frequently used and quite loosely, finally reaching the point that it is known as a term for abuse. There is also the theory of 'Generic Fascism' that remains in discussion; some Historians say it does not exist and others argue that it does. Further on, all these problems will be more deeply analysed and explained for a better understanding of why fascism is such a problematic theme. It is extremely hard, if not impossible, to know the exact definition of the term 'fascism'. There are uncountable interpretations by Historians, political commentators and even philosophers, all coming up with different definitions for one single term. ...read more.

Instead of giving each extreme right-wing regime a specific and complicated name, they use the term fascism for each one but specify it by mentioning the name of the country. For example fascism in Italy is referred to as Italian Fascism, in Germany it is known as German Fascism, and respectively with other countries such as Spain and Austria. Still this is a very disputable theory, and to some extent can be considered insufficient, because here we can see that not one exact definition is given to fascism, and the more simplified the term is the less accurate it will be also, not only this but the study of fascism would be an extremely large one since each country would have to be analysed. There are though, many Historians, who insist that these so-called fascist regimes are merely authoritarian, they cannot all be fascist because they are separate and have many different factors. Some even consider Mussolini's regime in Italy, as the only true Fascist one. Morris and Murphy state that fascism is "The beliefs of a body of Italian nationalists, which was created in 1919 to oppose Communism in Italy. ...read more.

This was one of the most important aspects of Hitler's regime, as well as the one that distinguished Germany from the rest of the countries in Europe. It can also be considered racism, and this was not a part of Italy or Mussolini's regime. This single factor is what makes Hitler a Nazi and not a Fascist. In the final analysis, the different interpretations given to the term fascism are very noticeable, and how they create controversial issues when it comes to deciding which regimes, both within Europe and outside it, can be truly considered as being Fascists. It is clear that to be fascist a regime, a country must follow certain guidelines and that many, throughout the past, have come close to what could have been a fascist country, but due to several factors did not reach it, unlike Mussolini. Still, all the different definitions and interpretations of the term fascism will most likely never become one alone, therefore Historians will continue having different points of view and ideas about which countries were fascist and which were not. In some cases, some will still resort to the theory of Generic Fascism and others will continue using the term as a simple representation of extreme right-wing regimes. ...read more.