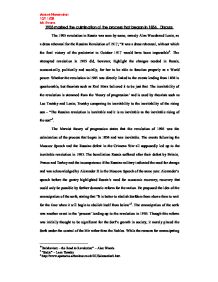 1905 marked the culmination of the process that began in 1856. Discuss.

The 1905 revolution in Russia was seen by some, namely Alan Woods and Lenin, as a dress rehearsal for the Russian Revolution of 1917; "It was a dress rehearsal, without which the final victory of the proletariat in October 1917 would have been impossible"1. The attempted revolution in 1905 did, however, highlight the changes needed in Russia, economically, politically and socially, for her to be able to function properly as a World power. Whether the revolution in 1905 was directly linked to the events leading from 1856 is questionable, but theorists such as Karl Marx believed it to be just that. The inevitability of the revolution is stemmed from the 'theory of progression' and is used by theorists such as Leo Trotsky and Lenin; Trotsky comparing its inevitability to the inevitability of the rising sun - "The Russian revolution is inevitable and it is as inevitable as the inevitable rising of the sun"2. The Marxist theory of progression states that the revolution of 1905 was the culmination of the process that began in 1856 and was inevitable. The events following the Moscow Speech and the Russian defeat in the Crimean War all supposedly led up to the inevitable revolution in 1905. The humiliation Russia suffered after their defeat by Britain, France and Turkey and the incompetence if the Russian military indicated the need for change and was acknowledged by Alexander II in the Moscow Speech of the same year. ...read more.

Provinces due to the increase in ethnic Latvians and Estonians, the assassination of Bobrikov (a governor-general appointed by Nicholas II in 1898) and mass protest in Finland and the overwhelming opposition to Russification in none other than Russian Poland. It is safe to say that the policy of Russification was a definite faux-pas on the Tsarist government's part and did more damage to Russia than good. This implementation of Russification and other Conservative ideology was greatly responsible for the huge growth of opposition the autocratic government saw in Russia after 1881. The 'Safeguard System', implemented at the same time Russification was, gave the police and the governor-generals almost unrivalled power. With the scare of assassination still apparent, the powers given to the police and governor-generals consisted of having the authority to arrest and detain suspected extremists, fine the local press6 and even shut the press down should they prove to be too outspoken. The control of the state by the Ohkrana served as another way for Alexander III to gain more control over Russia - control that had been compromised during his father's reign. The almost instantaneous growth in control over Russia under Alexander III's rule was hugely contrasting to his father's ruling and gave the proletariat another reason to revolt; yet another link to the revolution of 1905. ...read more.