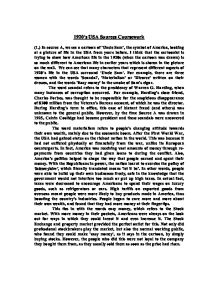 1920's USA Sources Coursework (1.) In source A, we see a cartoon of 'Uncle Sam', the symbol of America, looking at a picture of life in the USA from years before. I think that the cartoonist is trying to show how American life in the 1920s (when the cartoon was drawn) is so much different to American life in earlier years which is shown in the picture on the wall. We can see that many characters that represent different aspects of 1920's life in the USA surround 'Uncle Sam'. For example, there are three women with the words 'Scandal', 'Materialism' or 'Divorce' written on their dresses, and the words 'Easy money' in the smoke of Sam's cigar. The word scandal refers to the presidency of Warren G. Harding, when many instances of corruption occurred. For example, Harding's close friend, Charles Forbes, was thought to be responsible for the suspicious disappearance of $200 million from the Veteran's Bureau account, of which he was the director. During Harding's term in office, this case of blatant fraud (and others) was unknown to the general public. However, by the time Source A was drawn in 1925, Calvin Coolidge had become president and these scandals were uncovered to the public. The word materialism refers to people's changing attitude towards their own wealth, mainly due to the economic boom. After the First World War, the USA had gained status as the richest nation in the world. This was because it had not suffered physically or financially from the war, unlike its European counterparts. ...read more.

We can see in the photograph that there is quite a large crowd of people, which gives the impression that the majority of Americans supported Sacco and Vanzetti. However, that is not strictly true. Although the two accused men did have many supporters who protested against their impending execution, most normal American people agreed with it. This was mainly due to the American public's fear of Communists or 'Reds' as they were commonly called. Since the Russian Revolution in 1917, people had started to believe that communism was spreading and would eventually reach the USA. This caused the number of immigrants brought to America to be limited, and any that did come were discriminated against. This seems to be case with Sacco and Vanzetti. In hindsight, it appears that the two men were used as ''scape-goats' for a crime they possibly did not commit. Being Italian immigrants made them an easy target, and it was unlikely that the American public would believe their word against the American legal system and police. However, is this shown in the photograph? Without background knowledge of the subject, it would be hard to tell by the photograph whether most people were supportive of Sacco and Vanzetti or not. The photograph is quite misleading, as it seems as though the majority of the American public was on their side, which was not the case. Although I can not tell for sure, I believe that the people in the photograph are other immigrants, who were generally the only people that supported the two men. ...read more.

It is much more realistic than source K, for example using words such as 'vast numbers of Americans' instead of words like 'everybody' as seen in the first source. So, in my opinion, Source L shows a more reliable impression of 1920s life than source K. (7.) From looking at all the sources, it is very hard to draw a straight conclusion as to whether the 1920s was a 'golden age' for Americans or not. To decide, I will look at all the sources again. Firstly, it is evident that economically, America did extremely well in this decade. In source I we see that within three years (1926-1929) the number of cars produced each year had increased by over 1 million. We also see that within eight years (1920-1929) the number of cars registered had been increased by nearly three times and that within seven years (1922-1929) the amount of money spent on radios increased by $764.5 million. So what does this tell us? This basically shows us that the 1920s were the beginning of the age of consumer power. People began to have more money to spend on luxury goods, so in turn more were produced. This lead to the growth of industries in the nation. However, the ever-growing capitalism in the USA did not reach everyone. Source L shows us how there was still many people without jobs. Source I supports this fact by showing how there was a wide range of wages all over the country, ranging from just $129 per month to $1246 per month. Also, there was a great deal of intolerance in America. Sources B and C show in great detail how Negroes, in particular, suffered from intolerance. In source B we????????????????�?�?�?�?�?�?�?�??r?r `??r?r?????????????????�?�????????????????????????????? ...read more.