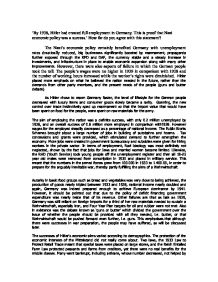 'By 1938, Hitler had created full employment in Germany. This is proof that Nazi economic policy was a success.' How far do you agree with this statement? The Nazi's economic policy certainly benefited Germany with unemployment rates drastically reduced, big businesses significantly boosted by rearmament, propaganda further exposed through the KPD and DAF, the currency stable and a steady increase in investments, and infrastructure in place to enable economic expansion along with many other improvements. However, there were also aspects of failure in which the German people took the toll. The people's wages were no higher in 1939 in comparison with 1928 and the number of working hours increased while the worker's rights were diminished. Hitler placed more emphasis on what he believed the nation needed in the future, rather than the demands from other party members, and the present needs of the people (guns and butter debate). As Hitler chose to rearm Germany faster, the level of lifestyle for the German people decreased with luxury items and consumer goods slowly became a rarity. ...read more.

Other failures are that as late as 1939, Germany was still reliant on foreign imports for a third of her raw materials needed to sustain a Wehrwirtschaft, especially iron, and Four Year Plan targets for oil and rubber were not met. Also in existence was the debate known as 'guns or butter' which divided the government over the issue of whether the people should be provided with all they needed, i.e. butter, or that Wehrwirtschaft would be pushed forward even further, i.e. guns. This emphasises that although there were successes in war preparation, the people may have suffered, as will be discussed later. The successes of Hitler's economic aims varied according to demographics. The protection of the economic interests of the Mittelstand did not really come about. Two laws, the 1933 Law to Protect Retail Trade meant that special taxes were placed on large stores, and the Reich Entailed Farm Law protected peasants and farms from creditors, yet there were no real benefits for the middle classes. ...read more.

The Nazi Ley even went as far as acknowledging that 'without the German worker, there is no German nation'. Yet, perhaps this only meant when creating a Wehrwirtschaft, as the general lifestyle of workers decreased, as they ate much less enjoyably and healthily, with less wheat bread and beer. By 1939 workers were under the control of the government who could direct them in any way they wished and employment was used against them, when they complained about the poor conditions. In conclusion, the economy can be said to have been neither a great success nor a great failure.. reduce state benefits, increase public expenditure and investment and stimulate consumer demand; all crucial for a healthy economy. Hitler was resolute that Germany had to be strengthened principally in a militarily sense. Rearmament and autarky were always contradictory, as Germany had need of more raw materials than she possessed, which would mean looking overseas. Therefore, not all the aims of Hitler's new economy could ever be realistically achieved and some failure would have to occur even before any of the policies had been put into action. ...read more.

This is a very tough question to approach as the student has to address the question of whether Hitler had achieved full employment and then whether this dictates completely the success of the economic policy. The student has made a ...

This is a very tough question to approach as the student has to address the question of whether Hitler had achieved full employment and then whether this dictates completely the success of the economic policy. The student has made a good attempt at answering the latter part of the question and has only skimmed over the former. This said, the argument is evident and validly supported in some cases. In attempting to address whether Hitler created full employment, a simple approach would to fully and explicitly state that, for the sake of argument, in the essay the argument that is presented is assuming that Hitler did (or did not) create full employment. Whilst this avoids a part of the question, it is perhaps a valid approach instead of simply skimming over it as this leaves out the main question - of course full employment was never achieved as Hitler never counted people like the Jews or the Gypsies, for example.

The answer is evident but the essay seems to try to address too much in one go. Certainly, according to the student's approach, it is important to address the other factors of employment demonstrating a successful economic policy but don't get too caught up on the one side. It is definitely more quality than quantity that gives way to a strong essay. The strengths of the essay is the detail that is given (there are many examples evident in the essay). This gives the argument more support but the student must remember to always fully develop the evidence they use.

The quality of written communication is average in this essay. As a piece of coursework, some mistakes are almost unacceptable. Such small mistakes leave a bad impression on some examiners and this is, of course, best to avoid. Needless to say, double (and triple) checking is very important and this is especially if the markscheme has marks for the quality of written communication! (They are 'silly' marks to lose!!)