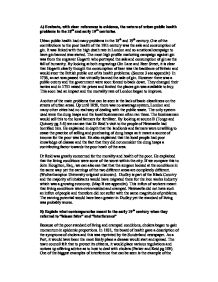 A) Evaluate, with clear references to evidence, the nature of urban public health problems in the 18th and early 19th centuries. Urban public health had many problems in the 18th and 19th century. One of the contributions to the poor health of the 18th century was the sale and consumption of gin. It was linked with the high death rate in London and so a national campaign to have gin banned was started. The most high profile marketing campaign against gin was from the engraver Hogarth who portrayed the sale and consumption of gin as the fall of humanity. By looking at both engravings Gin Lane and Beer Street, it is clear that Hogarth clearly thought the consumption of beer was the backbone of Britain and would steer the British public out of its health problems. (Source 3 see appendix) In 1736, an act was passed that virtually banned the sale of gin. However there was a public outcry and the government were soon forced to back down. They changed their tactics and in 1751 raised the prices and limited the places gin was available to buy. This soon had an impact and the mortality rate of London began to improve. ...read more.

They held a meeting on the 11th of November 1831 (Tonge and Quincey pg 22-29) to attempt to have the quarantine lifted. They argued that cholera had not arrived to Sunderland via the ports. They felt that the interference by the local council was unnecessary and actually causing more harm than good. This is a perfect example of "laissez faire" attitude. Another example of the "laissez faire" attitude is seen in the letter from Lord Londonderry. (Tonge and Quincey op cit pages 22-29) The letter had been written to a London newspaper but was reprinted in the Sunderland Herald. He writes to convince the readers that the claims of cholera in Sunderland had been greatly over exaggerated and possibly false. Lord Londonderry was a very influential man in the northeast and the prevention of trade movement would have had a large effect on his own businesses. He was very much in favour in leaving things alone and allowing business to continue despite the apparent outbreak of cholera. C) Analyse the barriers which lay in the way of reform of public health in the first half of the 19th century. It is surprising to see that public health took a long time to advance. ...read more.

In order to keep the public happy and prevent this Chartism from gathering pace public health reform was drafted in to keep the public happy. E) Assess the view that the public health act of 1848, was a limited response to the need for reform. The Public Health Act of 1848 was originally set out for just 10 years as a response to Chadwick's report on sanitation. The time constraint on the act was a limit in itself to the response to reform. However, the main limit on the health act was the fact it was not compulsory to comply with at a local level. Local Governments could pass by-laws if they felt that it did not suit the local area. Under the terms of the 1848 Public Health Act, only 13 of the 182 local boards built sewerage and waterworks. It is also possible to see that although local governments passed by-laws to escape some requirements of the health act it also encouraged some to actually set up their own local board of health. Some local boards even became competitive! The need for reform and the response to the public health reform invited debate within the country that had not been seen at this scale previously. ...read more.