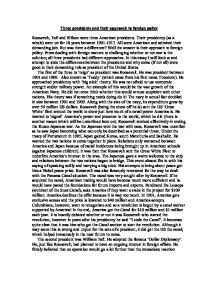 Three presidents and their approach to foreign policy Roosevelt, Taft and Wilson were three American presidents. Their presidency (as a whole) went on for 18 years between 1901-1917. All were American and admired their demanding job. But was there a difference? Well the answer is their approach to foreign policy. From dealing with foreign matters to challenging whether or not war is the solution; all three presidents had different approaches. In this essay I will look at and attempt to state the differences between the presidents and why some (if not all) were good in their demanding role as president of the United States. The first of the three to 'reign' as president was Roosevelt. He was president between 1901 and 1909. Also known as 'Teddy' (which came from his first name Theodore). He approached presidency with 'big stick' theory. He was not afraid to use economic strength and/or military power. An example of this would be the vast growth of the American Navy. He did not once think whether this would arouse suspicion with other nations. His theory was if something needs doing-do it! The navy in actual fact doubled in size between 1901 and 1909. ...read more.

He actively encouraged and supported American overseas investments as he saw it in the sense that whatever profited American bankers and benefited the industrialists was bound to benefit the US. Dollar Diplomacy didn't prove too popular in Latin America as they saw it (and rightly so) as an excuse for American expansionism. American mining firms helped start a revolution in 1909 against the uncooperative president Zelaya. An American warship helped persuade the new leaders (of a revolutionary government) that taking out loans from New York banks were the best option. By 1911, America was undoubtedly in control of the nation's finances. Taft, with his unique approach to presidency, had many achievements in his years as US president. The Mann-Elkins Act gave the interstate commerce commission power to revise railroad rate without waiting for complaints from shippers. Under the same reform, the ICC was able to regulate the important telephone and telegram companies. He greatly supported the sixteenth amendment, creation of the federal children's bureau, safety laws for mines and railroads, and the Mann White Slave Traffic Act. It seemed that he really cared about his fellow citizens. However, when economic influence didn't seem to work, he did look to use force. ...read more.

Probably one of the most famous peace conferences held. Germans asked for peace off the Americans (just goes to show how aware they were of America's superiority). Wilson made it clear about what he wanted with his 14 points. One of these was the introduction to the League of Nations. Although in the near future it had its streak of unsuccessfulness, it also had its successes and encouraged nations to work with each other. His mains aims were to minimize conflict and maximize co operation between nations. All presidents had their '15 minutes of fame' and achieved something in their years as presidents. Their approach to presidency differed, from Roosevelt's 'pro power' to Taft's 'semi power' to Wilson's 'anti power'. Roosevelt laid the foundations by increasing the naval size (which would be needed later on) and ended the Russo-Japanese war. Taft increased the nation's economic state and made it a nation of power through its economic strength. Wilson aided America through the war and done his best to avoid conflict. He laid the ground works of the League of Nations which would later go on to help the conflicts of the world. The three presidents differed in their approach to foreign policy, not in their ambition of spreading and protecting that valued American asset-democracy. ...read more.