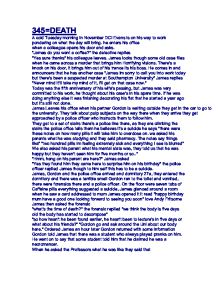 345=DEATH A cold Tuesday morning in November DCI Evans is on his way to work pondering on what the day will bring. he enters his office when a colleague opens his door and asks. "James do you want a coffee?" the detective replies "Yes sure thanks" his colleague leaves. James looks though some old case files when he came across a murder that brings him Horrifying visions. There's a knock on his door, it brings him out of his trance its his boss. He comes in and announcers that he has another case "James im sorry to call you into work today but there's been a suspected murder at Southampton University" James replies "Never mind it'll take my mind of it, I'll get on that case now." Today was the fifth anniversary of his wife's passing, but James was very committed to his work, he thought about his case's in his spare time. If he was doing anything else it was finishing decorating his flat that he started a year ago but it's still not done. James Leaves his office when his partner Gordon is waiting outside they get in the car to go to the university. They talk about pulp subjects on the way there when they arrive they get approached by a police officer who instructs them to follow him. ...read more.

"Andy Fritsome was found dead this morning do you know any one with a motive to commit this crime?" sternly said by James "ahh.. errr.. Not that I know off....." he said stuttering James thanked him for his help and started to leave, as they approached the bottom of the stairs, Richard North shouted "Wait! I know some one who has a motive but it's a really bad connection" "any lead is good tell" James said "Well the Uni Football team was in the country Final and Andy had an argument with the football team captain his name is Dave Ashton, Dave was always bulling him, then one day Andy told him that he had cursed him, everyone just laughed at him, but that day they lost that game due to an own goal that Dave scored." "I think we have our murder now all we need is to prove it, thanks Richard" James and Gordon left to go back to the dormitory where Andy Fritsome was found. While they were walking up the stairs Gordon turned to James and said "you don't think its him do you come on it must of took some intelligence to pull this one of, and his motive, was because they had an argument and Andy cursed him, I think you have got this one wrong it's a suicide James think about it." ...read more.

"Im not answering any of these questions without my lawyer" James walked out of the room and told Gordon to get him a lawyer, and also asked him to go the University and ask Richard about his camera, Gordon went to the University he found Richard and asked him about the camera, he told him that he took the camera back but left the microphone in there, Gordon then told him it is n offense to secretly record people, but informed him he would Probably get off if he helped solve this murder, Richard found the tape that was dated 02/11 when Richard played the tape he was horrified and so was Gordon, the tape was the evidence they needed to convict Dave when Gordon returned with the tape, he gave it to James he entered the interviewing room present in that room was Dave And his lawyer James played the tape, after the tape was finished Andy's lawyer asked if he could speak to his client alone James Obliged. James entered the room a few minutes later and Dave stared in James eye's "I did kill him im sorry" he then burst out in tears Two weeks later after the Trial James and Gordon speak in the corridor "I cant believe he made him work out his own death, that tape tells some story's" James said By Aaron Evans ...read more.