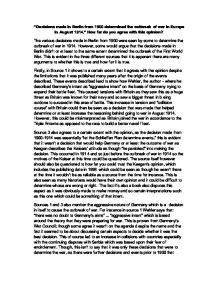 Decisions made in Berlin from 1900 determined the outbreak of war in Europe in August 1914. How far do you agree with this opinion?

"Decisions made in Berlin from 1900 determined the outbreak of war in Europe in August 1914." How far do you agree with this opinion? The various decisions made in Berlin from 1900 were seen by some to determine the outbreak of war in 1914. However, some would argue that the decisions made in Berlin didn't or at least to the same extent determined the outbreak of the First World War. This is evident in the three different sources that it is apparent there are many arguments to whether this is true and how far it is true. Firstly, in Source 1 it shows to a certain extent that it agrees with the opinion despite the limitations that it was published many years after the origin of the events described. These events described lead to show how Wehler, the author- where he described Germany's intent as "aggressive intent" on the basis of Germany trying to expand their battle fleet. This caused tensions with Britain as they saw this as a huge threat as Britain was known for their navy and so saw a bigger threat in being outdone to succeed in this area of battle. ...read more.

"aggressive intent" which is based around the theory that they were preparing for war. This is proven from Germany's War Council; though some agree it wasn't on the agenda despite the name and the fact it seemed to be about discussing certain aspects to decide whether it was the best decision. This of course led to an increase in collisions with countries especially with the continuing disputes with Serbia which was based upon their fear of encirclement. Though, this isn't to say that it was only these decisions that were to determine the war, as there were further decisions and events prior to 1900 that would increase the reasons for war. This is also seen in source 1 as it states "In the 1890's, commercial rivalry in the world's markets increased dramatically", which indicates the possibility at least in this source that there were more events that were the reason for the war. However, source 2 disagrees with the opinion that war broke out as a direct link from the decisions made in Berlin from 1900. ...read more.

This would disagree with the opinion due to not being a decision made from Berlin but a decision based on whether France and Russia were to make the first move, however this would lead to the tactic of the Schlieffen plan which is seen as a motive for war. These sources argue whether it was decisions made in Berlin that triggered the war, sources 1 and 3 argue for this but not to the same extent as the opinion and this is the opposite effect from source 2. And so the decisions made in Berlin that were seen in these sources were responsible for some influence in deciding the outcome of war in Europe but not to the extent the opinion offers, due to the way it was the decisions made prior to 1900 and in areas other than Berlin. It also comes down to the fact that if it was Germany to blame for the war, and the outbreak itself. But as this opinion narrows down the blame to just decisions based in a certain time period (1900-1914) it's difficult to agree with it to the same extent but decisions that were made were almost definitely another cause to add to the already colliding countries involved in the war. ...read more.

The author shows a good overall understanding of the viewpoints in the sources, and in some paragraphs is able to link this with own knowledge. This could have been done more in the second half of the essay however, and the points on provenance need reconsideration. 3 out of 5 stars.