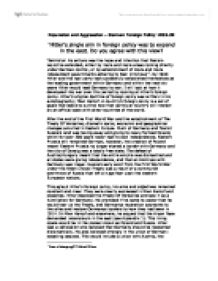 Hitler(TM)s single aim in foreign policy was to expand in the east. Do you agree with this view?

Expansion and Aggression - German Foreign Policy 1933-39 'Hitler's single aim in foreign policy was to expand in the east. Do you agree with this view? 'Behind all his actions was the hope and intention that Nazism would be extended, either by more and more areas coming directly under German control, or by establishment of more and more independent governments adhering to Nazi principles'1. By 1933 Hitler and the nazi party had successfully established themselves as the leading government within Germany and within the next six years Hitler would lead Germany to war. I will look at how it developed into war over this period by looking at Hitler's foreign policy. Hitler's original doctrine of foreign policy was written in his autobiography; Mien Kampf. A country's foreign policy is a set of goals that seeks to outline how that particular country will interact on an official basis with other countries of the world. After the end of the First World War and the establishment of The Treaty Of Versailles, dramatic social, economic and geographical changes occurred in Eastern Europe. Much of Germany and Tsarist Russia's land was taking away and giving to newly formed Poland, which for over 200 years never had its own independence. ...read more.

The three countries met at the Strassa conference in April 1935; however no formal agreement could be reached. The most common criticisms of the Treaty Of Versailles by Hitler were the creation of the Polish Corridor and the placing of the port of Danzig into the League of Nations administration. By 1938, 70 seats in the senate of Danzig was held by Nazi's, giving control to Germany and once again become part of the German Reich. In March 1938, Hitler fulfilled a long cherished personal ambition by invading Austria and proclaiming Anchluss between Germany and Austria. Mussolini's opposition was reduced by Italy's involvement in the Spanish Civil War and Mussolini's desire to develop a strong alliance with Germany, which had begun in 1936 with the formation of the Italian-German Axis. After Anchluss with Austria, Hitler turned his attention to Czechoslovakia. Before 1919, the provinces that made up Czechoslovakia were part of the Austro-Hungary Empire. Therefore there was a considerable German Speaking minority in Czechoslovakia, called the Sudaten Germans. In February 1938, Hitler promised protection to German minorities outside of the Reich's Borders. This was a clear signal that he was preparing to make a move against Czechoslovakia. ...read more.

Hitler's single aim in his foreign policy was not only to expand in the east, however this was his ultimate and most important goal as he had many different views on how he should achieve this. Hitler when coming to power did not follow his goal of Lebensraum immediately yet he followed the goal of reversing the Treaty Of Versailles, this could be argued to be his most important goal or to prepare for Lebensraum or to test the nations of Europe whether they could resist Hitler's attempts at later dates to expand. Appendix 1 Mien Kampf extracts 'We turn our eyes towards the land of the east.... When we speak of new territory in Europe today, we must principally think of Russia and the Border States subject to her. Destiny itself seems to wish to point out the way for us here. We must not forget that the Bolsheviks are bloodstained. That they overran a great state...and for ten years have been conducting the most tyrannous regime of all time. We must not forget that many of them belong to a race, which combines a rare mixture of bestial cruelty and vast skill inlies. 1 Years of change.pg377.Robert Wilson ...read more.