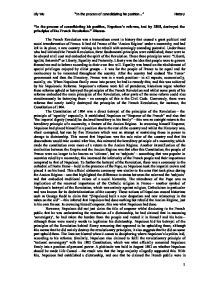 In the process of consolidating his position, Napoleons reforms, had by 1808, destroyed the principles of the French Revolution. Discuss.

"In the process of consolidating his position, Napoleon's reforms, had by 1808, destroyed the principles of the French Revolution." Discuss. The French Revolution was a tremendous event in history that caused a great political and social transformation of France. It had rid France of the 'Ancien R�gime' under a monarchy, and had left in its place, a new country waiting to be rebuilt with seemingly unending potential. Under those who had initiated the French Revolution, three fundamental principles were established; these were to be obeyed at all cost and embodied the spirit of the Revolution. These three principles were: "Libert�, �galit�, fraternit�" or Liberty, Equality and Fraternity. Liberty was the idea that people were to govern themselves and to behave according to their own free will. Equality was based on the abolishment of special privileges enjoyed by elitist groups - it was for the people of France to be equal and for meritocracy to be venerated throughout the country. After the country had endured 'the Terror' government and then the Directory, France was in a weak position - in all aspects, economically, socially, etc. When Napoleon finally came into power, he had to remedy this; and this was achieved by his Napoleonic Reforms. Napoleon's reforms were full of paradoxes; historians argue whether these reforms upheld or betrayed the principles of the French Revolution and whilst some parts of his reforms embodied the main principles of the Revolution, other parts of the same reform could also simultaneously be betraying them - an example of this is the Civil Code. Conversely, there were reforms that nearly totally destroyed the principles of the French Revolution; for instance, the Constitution of 1804. The Constitution of 1804 was a direct betrayal of the principles of the Revolution - the principle of 'equality' especially. It established Napoleon as "Emperor of the French" and also that "the imperial dignity [would] be declared hereditary in his family" - this was an outright return to the hereditary principle of a monarchy, a feature of the Ancien R�gime. ...read more.

In comparison, the Concordat is similar to this; it does both in regards to upholding and betraying the Revolution. Napoleon signed the Concordat as an attempt to consolidate the power. The Concordat solidified the Roman Catholic Church as the majority church of France and brought back most of its civil status; but most importantly, it united the French public. The Concordat was essentially a betrayal of the principles of the French Revolution. The Revolution had sought to destroy all Christianity in France - especially Catholicism; the First Estate was made up of the church clergy, and the revolutionists intensely opposed this. The creation of the Concordat was a public, official, agreement between the government and the church - something that went against all the Revolution's principles regarding religion. This was also symbolised by the critical involvement of the Pope, someone with whom a supposed supporter of the Revolution should not be associating with, much less make a peaceful deal with. Additionally, most of the terms of the Concordat furthered the betrayal of the Revolution; one of the terms was the confirmation that the separation of church and state had ended - one of the key principles of the Revolution. The historian, D.M.G Sutherland states "the Concordat was close to a restoration of the refractory church, the destruction of which had been a central feature of the great reforms of the National Assembly". If this fundamental rule was betrayed, then whatever term that followed, even if it upheld the Revolution, would be deemed insignificant in comparison. As well as this, the Concordat stated that public worship had to be "in conformity with police regulations which the government shall deem necessary for public peace"; this ensures the government's control over religion and is vague enough to leave the government with ultimate control over the Church. Whilst this upholds the revolutionary principle by restricting the Church, it simultaneously betrays the Revolution by initiating a system whereby there is an ultimate power that has control over the other ...read more.