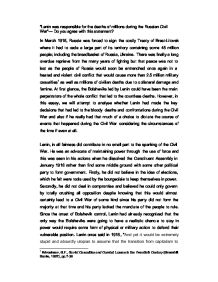 Lenin was responsible for the deaths of millions during the Russian Civil War Do you agree with this statement?

"Lenin was responsible for the deaths of millions during the Russian Civil War"- Do you agree with this statement? In March 1918, Russia was forced to sign the costly Treaty of Brest-Litovsk where it had to cede a large part of its territory containing some 45 million people; including the breadbasket of Russia, Ukraine. There was finally a long overdue reprieve from the many years of fighting but that peace was not to last as the people of Russia would soon be entrenched once again in a heated and violent civil conflict that would cause more than 2.5 million military casualties1 as well as millions of civilian deaths due to collateral damage and famine. At first glance, the Bolsheviks led by Lenin could have been the main perpetrators of the whole conflict that led to the countless deaths. However, in this essay, we will attempt to analyse whether Lenin had made the key decisions that had led to the bloody deaths and confrontations during the Civil War and also if he really had that much of a choice to dictate the course of events that happened during the Civil War considering the circumstances of the time if even at all. Lenin, in all fairness did contribute in no small part to the sparking of the Civil War. ...read more.

With one in five of the population starving, the Bolsheviks were forced to accept aid from foreign nations such as the American Relief Association (ARA).4 It was with this mindset that he dictated the terror that rained upon the millions of Russians at that time and caused the death of so many. There were other actors that played key roles in the events that occurred during the Civil War as well. One such person was Leon Trotsky who was a key figure in supporting the Bolshevik cause and defending its ideals in the most hardline of fashions. Trotsky was appointed Commisar of War in 1918. Adopting a similar practical approach to his handling of important issues, Trotsky consolidated the power of the Red Guard and supervised the development of a formidable Red Army. He called upon the services of ex-tsarist officers despite deep opposition from his party and instituted conscription on the areas under Bolshevik control. Trotsky did not hesitate to impose an absolute and violent control over the army. He commented on Septemeber 30th that the traitors of the army would risk the arrest of their families.5 Such was the reign of terror Trotsky was prepared to impose to insure the survival of his party. Trotsky was instrumental in the crushing of the Kronstadt Rising in 1921. ...read more.

In conclusion, while we can see clearly from the events that had taken place before and during the revolution, Lenin, as well as Trotsky, did play active roles in the decisions that were made. Some of which had led to the death of millions. To that effect, it would be fair to say Lenin caused the death of millions during the Russian Civil War. However, when considering the broader picture and the delicate grip over power the Bolsheviks had, it would seem that Lenin was led by circumstances of the time and did not have much maneuvering room to dictate the course of events considering the fact that his top priority was the preservation of his party's political power during the Civil War. (1315 Words) excl. footnotes 1 Krivosheev, G.F., Soviet Casualties and Combat Losses in the Twentieth Century (Greenhill Books, 1997), pp.7-38 2 Lenin, V.I., Collected Works (Progress Publishers, 1972), Volume 27, pp.235-77 3 Volkogonov, Dmitri, Lenin: Autopsy of an Empre: The Seven Leaders Who Built the Soviet Regime (Free Press, 1998), p. 238 4 Lynch, Michael, From Autocracy to Communism: Russia 1894-1941 (Hodder Education, 2008) pp. 152-153 5 Figes, Orlando, A People's Tragedy, The Russian Revolution 1891-1924 (Pimlico, 1996) pp. 590-591 6 Lynch, Michael, From Autocracy to Communism: Russia 1894-1941 (Hodder Education, 2008) p. 172 7 Trotsky, Leon, History of the Russian Revolution Volume 3 (1930) p. 125 ?? ?? ?? ?? ...read more.