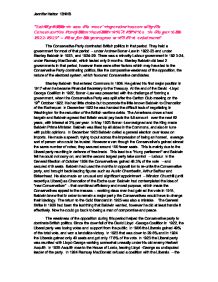 Stanley Baldwin was the most important reason why the Conservative Party dominated British Politics in the period 1922-1929 How far do you agree with this statement?

"Stanley Baldwin was the most important reason why the Conservative Party dominated British Politics in the period 1922-1929" - How far do you agree with this statement? The Conservative Party dominated British politics in that period. They held a government for most of that period - under Andrew Bonar-Law in 1922-23 and under Stanley Baldwin in 1923, and 1924-29. There was a minority Labour government in 1923-24, under Ramsay MacDonald, which lasted only 9 months. Stanley Baldwin did lead 2 governments in that period, however there were other factors which may have led to the Conservative Party dominating politics, like the comparative weakness of the opposition, the nature of the electoral system, which favoured Conservative candidates. Stanley Baldwin first entered Commons in 1908. He gained his first major position in 1917 when he became Financial Secretary to the Treasury. At the end of the David-Lloyd George Coalition in 1922, Bonar-Law was presented with the challenge of forming a government, when the Conservative Party was split after the Carlton Club meeting on the 19th October 1922. He had little choice but to promote the little known Baldwin to Chancellor of the Exchequer. In December 1922 he was handed the difficult task of negotiating in Washington for the reduction of the British wartime debts. The Americans drove a hard bargain and Baldwin agreed that Britain would pay back the full amount over the next 62 years, with interest at 3% per year. ...read more.

In 1923 that was down to 29.6% and in 1924 the Liberals gained only 40 seats and got only 17.6% of the vote. In 1923 the Liberal party was reunited with Lloyd-George working somewhat uneasily under his old enemy Herbert Asquith. In 1925 Asquith rose to the House of Lords, leaving Lloyd-George as undisputed leader of the party. In 1924 Ramsay MacDonald refused a coalition with the Liberals - the Liberals had kept Labour in office, but gained nothing in return. Labour waned to be the only progressive party in the Commons and the Tories wanted to be the only non-socialist party. Each, therefore, had an interest in seeing the Liberals decline. The two-party system had re-emerged - however this time it was Conservative-Labour, not Conservative-Liberal. The comparative weakness of the Labour party also meant that the Conservatives could dominate. Labour only held a minority government in 1924, which lasted only 9 months. Labour was still a very young party, and didn't have as much support as the Conservatives. Labour also lost some of their backing and funding after the 1927 Trade Disputes Acts which meant Labour party funds declined by around a quarter. The Bonar Law/Baldwin Government in 1922-23 had little time to try and have many achievements. However Chamberlin's Housing Act of 1923 introduced legislation to encourage local authorities to build more houses, by offering a subsidy. ...read more.

The Conservatives recruited and trained 352 new party agents between 1924 and 1937 who proved very efficient at organising the new absent voting system. Labour helped the Tories by refusing to support any moves towards proportional representation fearing that it would allowed the Liberals to challenge them when a Labour majority government seemed possible in 1924. Without such a move the Tories retained an unfair electoral advantage. Overall Stanley Baldwin did play an important role in the inter-war predominance of the Conservative party. He led the party in two governments, re-organised the party so it would appeal more broadly to the increased number of people eligible to vote and managed the General Strike in 1926, which no party came well out of. However the weakness of the opposition and nature of the electoral system gave the Conservative party an unfair advantage - which had little to do with Stanley Baldwin. The Conservative Governments also had many great achievements - Neville Chamberlin's reforms, 21/25 of which were passed. I do agree with the statement, as Stanley Baldwin's idea of "new conservatism" helped to organise the party and make the Conservative's have a broader appeal and support base. He also reunited the Conservative party after the split at the Carlton Club in 1922. Without Stanley Baldwin the Conservative party wouldn't have been so dominating during that period. ?? ?? ?? ?? Jennifer Hatton 12NHB ...read more.