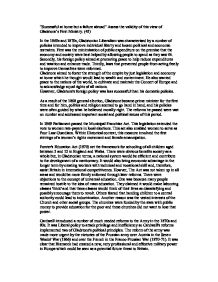 Successful at home but a failure abroad Assess the validity of this view of Gladstones First Ministry. (45)

"Successful at home but a failure abroad" Assess the validity of this view of Gladstone's First Ministry. (45) In the 1860s and 1870s, Gladstonian Liberalism was characterised by a number of policies intended to improve individual liberty and loosen political and economic restraints. First was the minimization of public expenditure on the premise that the economy and society were best helped by allowing people to spend as they saw fit. Secondly, his foreign policy aimed at promoting peace to help reduce expenditures and taxation and enhance trade. Thirdly, laws that prevented people from acting freely to improve themselves were reformed. Gladstone aimed to foster the strength of the empire by just legislation and economy at home which he thought would lead to wealth and contentment. He also wanted peace to the nations of the world, to cultivate and maintain the Concert of Europe and to acknowledge equal rights of all nations. However, Gladstone's foreign policy was less successful than his domestic policies. As a result of the 1868 general election, Gladstone became prime minister for the first time and for him, politics and religion seemed to go hand in hand, and his policies were often guided by what he believed morally right. ...read more.

By passing two such contrasting pieces of legislation Gladstone left many of the skilled artisans' bitterly disappointed. Licensing Laws, which gave magistrates the power to issue licenses to publicans, to fix opening and closing hours and to prohibit the adulteration of beer also worked against Gladstone, as they alienated the brewers and distillers who in future voted Conservative and gave generously to conservative party funds. In addition, public houses became centres of Conservative propaganda. The Public Health Act (1872) was a compulsory appointment of medical officers of health and The Judicature act of 1873 tidied up the organisation and roles of the courts and simplified the cumbersome and lengthy appeals. Martin Pugh suggests that Gladstonian Liberals set out on their reform programme with good intentions. Yet, in spite of passing laws to overcome injustice and abuses in the army, the civil service and the universities, by 1874 they has succeeded in antagonizing almost every group of former supporters, leaving the way open for a conservative victory by Disreli in the 1874 election. Gladstone's adoption of interest in Irish affairs in 1867 puzzled many of his contemporaries and has continued to puzzle historians. ...read more.

Protestant colleges were hotly opposed by Irish Catholics and the Catholic Hierarchy, who wanted a Catholic university for the education of the rising middle class. Gladstone devoted time and energy to the problem, but the resulting bill was rejected by a combination of Irish bishops, Irish MPs and dissenting Liberals. Between 1868 and 1874 Gladstone was committed to implementing change in Ireland. He personally took charge of drafting and defending the major bills, and his diaries reveal that he devoted immense study to individual Irish questions. But his only durable achievement was the Church Act, and his period in office witnessed and may have stimulated the growth of the Home Rule movement. His primary goals of establishing a framework of stability, of respect for the law and of acceptance of the Union were not achieved. Gladstone had proved more adept at articulating Ireland's grievances and outlining broad remedies than in devising concrete successful legislation. In conclusion, Gladstone's reforms challenged the notion of privilege, encouraged the promotion of meritocracy and, taken as a whole, underlined the principles of equality in a just society. However, they also alienated a lot of non- conformists (people who he needed voting for him). The Alabama case and Black Sea Causes led to failure abroad and in turn resulted in the liberals losing the 1974 general election. ...read more.