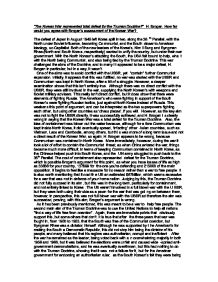 The Korean War represented total defeat for the Truman Doctrine? H. Brogan. How far would you agree with Brogans assessment of the Korean War?

“The Korean War represented total defeat for the Truman Doctrine?” H. Brogan. How far would you agree with Brogan’s assessment of the Korean War?

The defeat of Japan in August 1945 left Korea split in two, along the 38th Parallel, with the North under Soviet influence, becoming Communist, and the South closer to American ideology, so Capitalist. Both of the new leaders of the Korea’s, Kim Il Sung and Syngman Rhee (North and South Korea, respectively) wanted to unify the country, but under their own government. With the North Korean’s attacking the South, the USA felt bound to help, what with the North being Communist, and also being tied by the Truman Doctrine. This war challenged the aims of the Doctrine, and to many it appeared to be a major defeat, H. Brogan in particular, but in a way, it wasn’t.

One of the aims was to avoid conflict with the USSR, yet “contain” further Communist expansion. Initially, it appears that this was fulfilled, no war was started with the USSR and Communism was kept in North Korea, after a bit of a struggle. However, a deeper examination shows that this isn’t entirely true. Although there was no direct conflict with the USSR, they were still involved in the war, supplying the North Korean’s with weapons and Soviet military advisers. This really isn’t direct conflict, but it does show that there were elements of fighting Russia. The American’s who were fighting in support of the South Korean’s were fighting Russian tactics, just against North Korea instead of Russia. This weakens this point of argument, and can be interpreted as the two superpowers fighting each other, but using other countries as ‘chess pieces’, if you will. However, as the key aim was not to fight the USSR directly, it was successfully achieved, and H. Brogan is clearly wrong in saying that the Korean War was a total defeat for the Truman Doctrine. Also, the idea of containment was blown out the water because, although for a time Communism was kept inside North Korea, it did eventually spread, ‘infecting’ other Asian countries, such as Vietnam, Laos and Cambodia, among others, but this was more of a long term issue and not a direct result of the Korean War, so again, H. Brogan appears to be wrong, because Communism was contained in North Korea. More immediately, however, during the war it took a lot of effort to contain the Communist threat, as when China entered the war, things became much more difficult, in terms of keeping Communism contained in North Korea, as the Chinese helped push into South Korea, and the UN army struggled to push back to the 38th Parallel. The cost of containment also represented defeat for the Truman Doctrine, which is possible Brogan’s argument for this point, as when you have losses of life as high as 33686 for your country, 137899 for the one you’re defending and 215000 of the main opposition, it begins to feel like a massacre for no reason rather than a war to free people. It is also worth mentioning that it cost the US an estimated $67billion, which seems excessive for a war that was not in defence of your home nation. Judging by this, the Truman Doctrine did not fully succeed in its aim, but this was in the long term, particularly for containment, and not entirely linked to Korea. The US weren’t involved in a full blown war with the USSR, but they were both using their side as a pawn for the war that was going on between them, however, in perspective, this was not full blown war with the USSR ad therefore the aim was succeeded, proving, with this aim, Brogan’s argument is wrong.

As it has been previously mentioned, this was meant to be a war to help free people. The second main aim of the Truman Doctrine was to use the United Nations to help all nations “find a way of life free from coercion”.  Again, there are immediate points that obviously support this, but some others that don’t. It is true that after the three years that war was fought in, from 1950 to 1953, that the South was free of the Communist coercion, but Syngman Rhee was a dictator, himself. Although he was supported by the American’s for making the South a Democratic Republic, this did not stop him being the dictator of his people, and many believed that his regime was authoritarian, corrupt and inefficient. After the war he remained as the leader, being voted back with an overwhelming majority in both 1956 and 1960, but it was believed the elections were unfair and caused wide-spread anti-government demonstrations, and he was eventually overthrown, but this had nothing to do with the Truman Doctrine, showing that it was not a failure for it, but for the American government for endorsing an authoritarian ruler, as the South Korean’s felt they were being subjected to a dictator, which does not indicate a life free from coercion. The UN didn’t help in this matter, either, but they did form an army with the recommendation that troops should be sent to help defend South Korea. The US gave the most soldiers, sending a total of 5720000 servicemen to help with the war.  Even the fact that the UN backed the US in their endeavour to help South Korea shows that this aim was successful. However, Brogan is probably thinking more long term, as after this conflict, which people believed would be short and easy to win, the UN never again became involved in any way of fighting Communism. In fact, the only reason it was possible for them to do this was because the USSR was Boycotting the UN at the time the decision was made, so they could have vetoed it, but with there being no representative for the USSR, the UN were able to support the USA, and this resulted in a ‘victory’ for this aim, once more countering H. Brogan.

Already it is plain to see that the Truman Doctrine was trying to deal with the problem of Communist aggression, which the third aim dealt with, saying that it would help any “free peoples” to resist armed, Communist aggression with economic and military aid. This is immediately supported by the fact that the USA supplied not only troops to help fight the world, but also $150million in February 1950, although it had been delayed up to this point since 1948. This money was for economic rehabilitation, education and government improvements, and shows American economic support. The Korean Military Advisory Group (KMAG) was established in the US in 1949, and although initially the US were unwilling to give up large quantities of weapons, in 1950 South Korea had 14 planes, a large army and 500 KMAG troops. Although this seems small, the numbers increased over the course of the three years that the US was involved in the war. Further military aid was clearly given, as the US joined the war in June 1950, and sent their 5720000 servicemen and Truman was able to justify the US involvement with the Truman Doctrine, as it was the North Korean’s who first acted aggressively, pushing the South Korean’s into the Pusan Perimeter, which was a tiny area on the Southeast coast of Korea. The North Korean’s were also Communist and armed, therefore fulfilling the requirement for Truman to act, and also fulfilling this aim of the Truman Doctrine, giving evidence to counter Brogan. However, the mistake was to assume that all of North Korea were the enemy, which led to mass slaughter of innocent civilians due to the North Korean army using Guerrilla tactics and camouflaging with the civilians. Here the US weren’t helping “free peoples” and were instead killing them. This is a definite failure for the Truman Doctrine, as there were people in the North who wanted to live under a democratic government, who wanted to be free and who were wrongly targeted as the enemy. The military tactic of just dropping bombs all over the place was what led to 215000 North Korean’s dying, coupled with actual fighting in the field. Here, Brogan is correct, as this did represent failure to protect ANY “free peoples”. This was a direct result of the war and therefore shows that the Truman Doctrine failed in this part of its aim, however it was successful in sending both military and economic aid to South Korea to defend against an armed, Communist aggressor.

Although the Doctrine was specifically set up to deter communism and to also contain what was already around, it was also there to convince the US public that Truman was committed to opposing international Communist aggression. The only real ‘victory’ of this aim would be that Truman took action in Korea and was dedicated to it throughout his presidency, staying with it until he was replaced in 1953. However, this was ultimately a defeat for the Truman Doctrine, which supports Brogan, as in the 1952 pre-election polls showed that support for Truman had diminished, and this was confirmed in the 1953 elections when he was replaced by General Dwight D. Eisenhower. This shows that the Korean War was unfavourable and the fact it dragged on made matters worse, as it made Truman look more incompetent, when he needed a short and successful war to hold his position of popularity with the public. Although the Truman Doctrine was specifically for Truman, it is notable that when Eisenhower pulled out of the war with an armistice his popularity did not diminish, which really does suggest that the war made Truman unpopular, particularly with it being so unsuccessful not long after the triumph of the Second World War. Brogan’s view, it would appear, is supported by the failure of this aim.

The Truman Doctrine set out with the overall aim to help keep Communism at bay and with this it was ultimately successful during the Korean War. When broken down, it still seems more successful than unsuccessful and it is an exaggeration to say that it “represented total defeat”, as Brogan states. However, it is true to say that it failed in helping all of the “free peoples” in Korea, as there were North Korean’s who wanted to be free of Communist rule, and they weren’t because the North was the aggressive nation in the eyes of the USA. It also failed to retain the popularity of Truman, but it succeeded in containing Communism in North Korea, it left the South free of Communism, although under authoritarian rule, so not completely free from coercion. The US also provided both military and economic aid to help fight an aggressive, Communist attack without starting a war with the USSR. This shows that the Truman Doctrine was ultimately more successful than unsuccessful and H. Brogan’s assessment of the Korean War is an exaggeration of the bad parts of the war, clinging onto the way it did not uphold Truman’s popularity or free all of the people of Korea from coercion, but these are outweighed by the containment of Communism, the support of the UN and most importantly, not starting a war with the USSR.