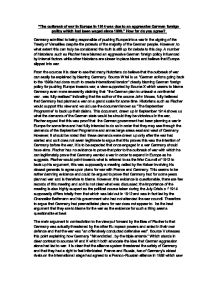 The outbreak of war in Europe in 1914 was due to an aggressive German foreign policy which had been waged since 1900. How far do you agree?

"The outbreak of war in Europe in 1914 was due to an aggressive German foreign policy which had been waged since 1900." How far do you agree? Germany admitted to being responsible of pushing Europe into a war in the signing of the Treaty of Versailles despite the protests of the majority of the German people. However, to what extent this can truly be considered the truth is still up for debate to this day. A number of historians such as Fischer have blamed an aggressive German foreign policy influenced by internal factors while other historians are slower to place blame and believe that Europe slipped into war. From the sources it is clear to see that many historians do believe that the outbreak of war can easily be explained by blaming Germany. Source W tells us "German actions going back to the 1890s had done much to create international tension" clearly blaming German foreign policy for pushing Europe towards war, a view supported by Source X which seems to blame Germany even more reverently claiming that "the German plan to unleash a continental war...was fully realised" indicating that the author of the source John Moses, fully believed that Germany had planned a war on a grand scale for some time. ...read more.

France and Russia, two of Germany's oldest rivals on the international stage had agreed to a Franco-Russian alliance in 1892 which saw Germany literally encircled by two of the great European powers and two of its oldest enemies. In the early 20th century Britain also exited its period of "Splendid Isolation" and signed agreements with France and Russia thus forming the Triple Entente and arguably isolating Germany in diplomatic terms. However, this sudden rush of alliances in Europe was in fact triggered by Germany, Otto Von Bismarck, German chancellor under Kaiser Wilhelm I sought to ensure that Germany was on good terms with many European powers and sought to ally Germany with as many of these powers as possible. This was done to ensure that France not Germany would be the nation isolated in Europe in order to check any hope of revenge for the Franco-Prussian War. Thus the "Triple Alliance", an agreement between Germany, Austria-Hungary and Italy was ratified in 1882 and so it could be argued that the creation of the web of alliances that so threatened the security of Germany was created by their own doing. ...read more.

However, it could be blamed that events in the Balkans were not entirely out of the control of the German state. It was the choice of the German government to throw their support behind Austria-Hungary over the issue of the Balkans during both the Bosnian Crisis and with the issuing of "The Blank Cheque" during the July Crisis 1914. Had Germany not done this then arguably, what was only a local matter could have remained so and not developed into an international crisis. It may not have been the intention of Germany to cause this situation however it was certainly a foolishly executed plan and shows a certain level of aggression in their policy making. In conclusion, Germany no doubt did harbour a foreign policy that was aggressive at the best of times, Brinkmanship had seen the relationships between European powers dwindle to a low however, it seems unfair to blame them for planning a war. They may have pushed Europe in that direction but it does not seem that it was ever their full intention, instead they simply found that they had to back their words with actions in the support of Austria-Hungary. Germany blundered into the war on a load of hot air rather than through any desire to plunge Europe into war. ...read more.