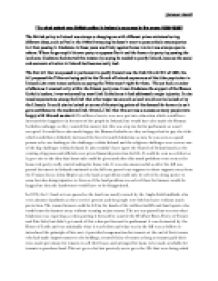 To what extent was British policy in Ireland a success in the years 1868-1886?

"To what extent was British policy in Ireland a success in the years 1868-1886? The British policy to Ireland was always a changing one with different prime ministers having different ideas, such as Peel in the 1920s first saying he doesn't want to pass catholic emancipation but then passing it. Gladstone in these years was firmly against home rule but was always open to reform. Where he gave split his own party to appease Davit and the home rule party by passing the land acts. Gladstone had started this mission by saying he needed to pacify Ireland, because the social and economic situation in Ireland had become really bad. The first bill that was passed in parliament to pacify Ireland was the Irish Church Bill of 1869, the bill proposed the Tithe not being paid to the Church of Ireland anymore as of the 5.8m population in Ireland 5.3m were roman catholic so paying the Tithe wasn't right for them. The act had a number of effects as it created unity within the Liberal party also it won Gladstone the support of the Roman Catholic leaders, it was welcomed by most Irish Catholics as it had addressed a major injustice. It also raised expectations among the Irish that other major issues such as land would now be looked at by the Liberals. ...read more.

The home rule party was established by Isaac Butt. In 1878 2 more potato crops failed but this time it was less widespread than last time. Also in 1878 Charles Parnell emerged as the leader of the Home Rule party and became the president of the Land League. In 1879 Davit an Ex-Fenian had established the land league where the idea was to campaign for the 3Fs but more aggressively. In 180, Disraeli lost the election and Gladstone got back into power, the home rule party in this election managed to get 60MPs into parliament Parnell also in this time organized boycotts in a response to the minor bill being defeated in which he would get compensation for evicted tenants. Parnell now followed a policy of philibustering where his Mps in parliament would get up and stand for many hours and basically tell Gladstone he must help in Ireland as it is really bad, this policy would ultimately just delay things rather than getting Gladstone to commit to anything. The Irish Secretary, Forster, insisted on the 1881 Coercion Bill and despite 41 hours of filibustering from the home rule party it passed in February, after the Lord Speaker was forced to guillotine the debate for the first time in Westminster. By 3 February, Davit was arrested and 36 Irish MPs were expelled after an uproar in the Commons. ...read more.

Churchill made it clear he was supporting them by going to Belfast Hall and telling the people there you are the law abiding citizens whatever you want should be granted and not what the criminals are demanding should be granted. Also, Ulster was like the Birmingham or Manchester of Ireland it was developed and wasn't dependant on farming it had moved ahead and gone to the factories and it was prosperous and industrious. With the granting of home rule would not compulsorily need their permission but if the better of Ireland was being looked at then these people would definitely need to be appeased. As Churchill said "Ulster will fight and Ulster will be right". Overall, I feel that the policy was a failure more than a success because even though the Irish were given what they wanted in the 3Fs Gladstone still had to force it upon the people by agreeing the Kilmainham Treaty with Parnell, also after anything was done in Ireland a coercion act was needed so it shows that even though they were getting what they wanted at that time not concentrating on home rule they still weren't happy. Also, a problem for Gladstone was that the Irish could look at Canada and say they have a home rule type of state why can't we? Gladstone made a great effort to pacify Ireland but the problem for him was that it wasn't the need of the time as far as Parliament was concerned and this ultimately showed. ?? ?? ?? ?? Usmaan Hamid ...read more.

The student answers the question well by considering the two sides of the argument: for example, they say things like ''Overall, I fell that this act was a success'' but then later point out areas where Gladstone's policy wasn't a ...

The student answers the question well by considering the two sides of the argument: for example, they say things like ''Overall, I fell that this act was a success'' but then later point out areas where Gladstone's policy wasn't a success. This shows that they are thinking widely and appreciating the fact that there are several opinions on every historical event. The student could make this understanding clearer in the introduction - they could simplify it and say ''In some ways it was a success'' then give one key reason as an example, and then do the same for the other side. This would show they can organise their knowledge, because at present the introduction isn't clearly structured.

The student uses a good range of evidence, especially statistics: ''about Ã‚Â£25 million of assets'' is good as it shows the student understands that this is a substantial and effective amount of money to put into education. It's always better to put a statistic if possible - ''lots of assets'' would have sounded vague. At some points in the essay the student could analyse things more deeply: for example, when analysing the statistic just quoted, they say it led to ''happiness'', and this is bad as it's too general. It would be better to say it led to ''improved quality of life'' because that is an economic phrase, so it is more academic than ''happiness'' which is a general term. The conclusion is good because it reaches a judgement and explains why that is the strongest, which is good as it shows the student can assess what they have written and decide that one interpretation is better than another. It is especially good that the student uses several reasons to support their interpretation, as it shows their argument is strong.

The student's style of writing is not always appropriate for A Level work. For example, in ''the people of Ulster stood up and said we don't want to...'', the use of ''we'' sounds more like something you would say in conversation rather than in an essay. It would better to say ''the people of Ulster expressed their opposition to...''. The spelling, grammar and punctuation are good but there are some mistakes, such as ''fell'' should be ''feel''. It isn't crucial to get perfect spelling but mistakes make the essay look untidy and can sometimes leave the examiner struggling to understand what you mean. I always made sure I left enough time (about 3 minutes in an exam) to check that my answers made sense.