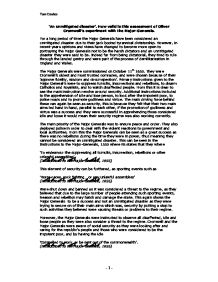 An unmitigated disaster. How valid is this assessment of Oliver Cromwells experiment with the Major-Generals.

'An unmitigated disaster'. How valid is this assessment of Oliver Cromwell's experiment with the Major-Generals. For a long period of time the Major Generals have been considered an unmitigated disaster due to their jack booted tyrannical dictatorship. However, in recent years opinions and views have changed to become more open to portraying the Major Generals not to be the harsh dictators and an unmitigated disaster they were said to be. Indeed far from being dictatorial, they tired to rule through the landed gentry and were part of the process of demilitarization in England and Wales. The Major Generals were commissioned on October 11th 1655. They were Cromwell's oldest and most trusted comrades, and were chosen because of their 'approve fidelity, wisdom and circumspection'. Primary instructions given to the Major General's were to suppress tumults, insurrections and rebellions, to disarm Catholics and Royalists, and to watch disaffected people. From this it is clear to see the main instruction revolve around security. Additional instructions included to the apprehension of idle and lose person, to look after the impotent poor, to police roads and to promote godliness and virtue. The main driving force behind these can again be seen as security, this is because they felt that their two main aims led hand in hand, parallel to each other, if the promotion of godliness and virtue was a success and they were successful in apprehending those considered idle and loose it would mean their security regime was also working correctly. The main priority of the Major Generals was to ensure peace and order. They also deployed police in order to deal with the violent reactions to government and local authorities. From this the Major Generals can be seen as a great success as there was no rebellions during the time they were in power, thus meaning they cannot be considered an unmitigated disaster. This can be seen in the Instructions to the Major-Generals, 1555 where its states that they where 'To endeavour the suppressing all tumults, insurrection, rebellions or other unlawful assemblies' (Instructions to the Major-Generals, 1655) ...read more.

However, this could also refer to security, because by disarming those who were opposed to both Cromwell and the Major Generals, they could rule without any opposition and this part of their instruction, security can be considered a success for the Major Generals. Cromwell wanted the Major Generals to promote godliness and virtue amongst those living throughout England and Wales. This meant putting an end to and discouraging ungodliness, he did this by placing 'Laws against drunkenness, blaspheming and taking the name of God in vain'. (Instructions to the Major-Generals, 1655) This could again be connected with their security policy as ungodliness and drunkenness could encourage treason and rebellion. It was believed by Oliver Cromwell that if people were godly, they would in turn support the regime he promoted. Though, this godliness policy clearly failed, as they were unable to unite religion throughout the country. Though it could be said that how could the Major Generals possibly become morale police, overlooking everyone's social activities with such large areas to regulate. Edmund Ludlow, a Cavalry Officer in the NMA in the Civil War, a Parliamentarian, wrote his memoirs in 1698. He became disillusioned with Cromwell's regime which led to him becoming Anti-Cromwell. Moreover, these memoirs were written a long time after the events of the Civil War and Cromwell's Major Generals, when William and Mary were on the throne, thus meaning it was safe to provide real opinions and feelings on the events that occurred with the Major Generals. Within the passage, Ludlow criticises the Major Generals, stating that people suffered from the Decimation Tax, 'Decimating to the extremity whom they pleased', (The Memoirs of Edmund Ludlow, 1698) Though, it can be said the Major Generals didn't collect enough, evidence of this can be portrayed through how difficult is was for the Major Generals to assess those who should pay it, meaning it was also very time consuming which caused it to be overlooked. ...read more.

It could also be said that Cromwell failed to back the Major Generals and the new Cromwellians made a concerted effort to get rid of them. The Major Generals security system was a great success, as they disarmed the royalists; they were unable to move without the Major Generals knowing about it. It took until 1658 for the Royalists to build up the network that they had in 1655. However, seconds only to security was bringing England and Wales to Godliness, though in this they failed. They were unable to build a relationship with the neutral gentry. Moreover they failed to collect enough Decimation Tax and they were unable to control the 1656 election. And although they failed in promoting one of their main instructions, Godliness, they can not be considered and unmitigated disaster due to the successfully endorsing a better security system. The Major Generals were incredibly significant; they were the agents of a centralized system. They were soldiers and the 'black legend' of their military rule continued long after they were gone. They became deeply unpopular because they were unconstitutional and people were unhappy about their moral policing. It was their morale policing that probably finished the Major Generals, but opponents preferred to use the more respectful platform of being against their military dictatorship. There was no precedent for the Major Generals. Nothing like it had ever existed, and nothing like it in this country has existed since. Reference: * Instructions to the Major-Generals, 1655 * Major-General Edward Whalley to Secretary Thurloe, 24 November 1655 * Major-General Edward Whalley to Secretary Thurloe, 1656 * Reliquiae Baxterianae, 1696 * Major-General William Goffe to Secretary Thurloe, 1656 * T. Barnard, The English Republic, 1649-1660, 1982 * The Memoirs of Edmund Ludlow, 1698 * C. Durston, Cromwell's major-generals, 2001 * Francois Guizot, The History of Oliver Cromwell and the English Revolution, 1854 * Roger Coke, A Detection of the Court and the State of England during the Last Four Reigns and Interregnum, 1694 * John Buchan, Oliver Cromwell, 1934 * A. C. ...read more.