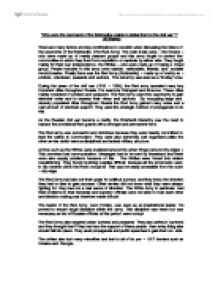 Why were the opponents of the Bolsheviks unable to defeat them in the civil war?

"Why were the opponents of the Bolsheviks unable to defeat them in the civil war"? (40 Marks) There are many factors and key contributions to consider when discussing the failure of the opponents of the Bolsheviks (The Red Army). The main rivals were; - the Greens - who were made up of mainly peasant groups and this army fought to protect the communities in which they lived from requisition or reprisals by either side. They fought mainly for their own independence, the Whites - who were made up of mainly a mixed group. People included in this army were tsarists, nationalists, liberals, and socialist revolutionaries. Finally there was the Red Army (Bolsheviks) - made up of mainly ex - soldiers, volunteers, peasants and workers. ...read more.

Armies such as the Whites were scattered around the urban fringe (around city edges). This provoked bad communication. Messages had to be sent by horseback and there were also supply problems because of this. The Whites were forced into violent requisitioning. They found receiving supplies difficult, because all the armaments were in city centres which the Red's occupied. This was not easily accessible from the outer - city edge. The Red Army had also set their goals for political success and they knew the direction they had to take to gain success. Other armies did not know what they were always fighting for; they had not a real sense of direction. The White Army in particular, had their problems in that Generals and superior officials were not able to trust each other and decision making was therefore made difficult. ...read more.

This led to the Red Army having excellent communication within such a huge county, in comparison with the other armi9es whose communications had failed miserably. The Reds also signed the treaty of Brest - Litovsk which enabled the Reds to prepare for any on - going decisions that needed to be made. It signalled Russia's exit from WW1 and the civil war was soon established after this. In conclusion, these were the main factors and key important factors that helped the Red army to success and victory and the other armies to failure and defeat. Excellent Communication, Occupation of Large and popular cities, Superb Organisation and leadership skills, Discipline, and military structure. The other armies needed these key areas to secure the civil war. Unfortunately they did not and the Bolsheviks took this advantage and used it against their foes very successfully. ...read more.