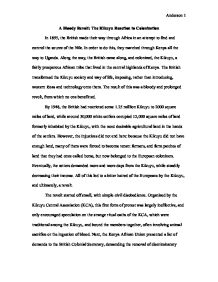 A Bloody Revolt: The Kikuyu Reaction to Colonization

A Bloody Revolt: The Kikuyu Reaction to Colonization In 1895, the British made their way through Africa in an attempt to find and control the source of the Nile. In order to do this, they marched through Kenya all the way to Uganda. Along the way, the British came along, and colonized, the Kikuyu, a fairly prosperous African tribe that lived in the central highlands of Kenya. The British transformed the Kikuyu society and way of life, imposing, rather than introducing, western ideas and technology onto them. The result of this was a bloody and prolonged revolt, from which no one benefitted. By 1948, the British had restricted some 1.25 million Kikuyu to 2000 square miles of land, while around 30,000 white settlers occupied 12,000 square miles of land formerly inhabited by the Kikuyu, with the most desirable agricultural land in the hands of the settlers. However, the injustices did not end here: because the Kikuyu did not have enough land, many of them were forced to become tenant farmers, and farm patches of land that they had once called home, but now belonged to the European colonizers. Eventually, the setters demanded more and more days from the Kikuyu, while steadily decreasing their income. ...read more.

Also, they became even bolder in their acts of violence, killing people in broad daylight, and vandalizing the houses of Europeans, sometimes even setting fire to them. All of this together combined caused the KCA's influence to steadily fall until it only had authority in the Kiambu District. In June of 1952, Mitchell was replaced by Henry Potter as acting Governor. Almost immediately he was made aware of the Mau Mau problem, and for the first time, something was done to stop the Mau Mau. However, the actions taken against the Mau Mau were very little, and largely ineffective, hence, Potter was replaced by Sir Evelyn Baring in October of 1952, who, realizing the seriousness of the problem, declared a state of emergency. The British acted immediately, arresting nearly 100 people on the same day the Emergency was declared in an operation called Jock Scott. The intent of this operation was to get rid of all of the rebel leadership, thus stopping the rebellion in its tracks, and over the course of 25 days around 8,000 people were arrested. This had the opposite affect unfortunately, and violence actually increased, with the first European killed two weeks after the state of Emergency was declared. ...read more.

Finally, in April of 1954, the British began to realize the extent of the rebel organizations, and this spelled the beginning of the end for the Mau Mau. The British simply shut down Nairobi, and arrested over 17,000 Africans, effectively destroying the Passive Wing of the revolt. Once done in Nairobi, the authorities repeated the exercise in other areas, and by the end of 1954, 77,000 Kikuyu were in concentration camps. Without the support of the Passive Wing, the Land and Freedom Armies began to fall, and in January of 1954 when the British began to comb the forests of the Aberdare Mountains for rebels, they met little resistance. The hunt for rebels, now even more deeply embedded in the forests, continued for several years until the Mau Mau were basically non-existent. The uprising finally ended in early 1956 with the capture of the last Mau Mau leader, Dedan Kimathi in October of 1956, although some Mau Mau remained in the forests until 1963. Despite the fact that the British clearly won, crushing the rebellion, the Kikuyu still ended up having their demands granted. This was because the British had the choice between an unstable colony that was costing a fortune, and a stable colony run by Africans that contributed to the empire economically. Effectively, the British cut their losses and gave in. ?? ?? ?? ?? Anderson 1 ...read more.