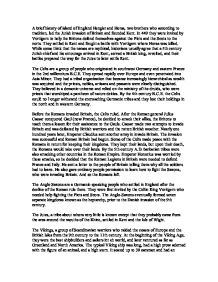 A brief history of island of England Hengist and Horsa, two brothers who according to tradition, led the Jutish invasion of Britain and founded Kent.

A brief history of island of England Hengist and Horsa, two brothers who according to tradition, led the Jutish invasion of Britain and founded Kent. In 449 they were invited by Vortigern to help the Britons defend themselves against the Picts and the Scots to the norts. They settled in Kent and fought a battle with Vortigern where Horsa was killed. While some think that the names are mythical, historians usually agree that a 5th century Jutish chief and his entourage arrived in Kent, served a British king, revolted, and their battles prepared the way for the Jutes to later settle Kent. The Celts are a group of people who originated in southwest Germany and eastern France in the 2nd millennium B.C.E. They spread rapidly over Europe and even penetrated into Asia Minor. They had a tribal organization that became increasingly hierarchical as wealth was acquired and the priests, nobles, artisans and peasants were clearly distinguished. They believed in a demonic universe and relied on the ministry of the druids, who were priests that worshiped a pantheon of nature deities. ...read more.

He also gave ordinary people permission to learn how to fight the Saxons, who were invading Britain. And so the Romans left. The Anglo Saxons are a Germanic-speaking people who settled in England after the decline of the Roman rule there. They were first invited by the Celtic King Voritgern who needed help fighting the Picts and Scots. The Anglo-Saxons eventually formed seven separate kingdoms known as the heptarchy, prior to the Danish invasion of the 9th century. The Jutes, a tribe about whom very little is known except that they probably came from the area around the mouths of the Rhine, settled in Kent and the Isle of Wight. The Vikings, a group of Scandinavian warriors who raided the coasts of Europe and the British Isles from the 9th century to the 11th century. At the beginning of the Viking Age, they were the best shipbuilders and sailors int eh world, and later ventured as far as Greenland and North America. The typical Viking ship was long, had a high prow adorned with the figure of an animal, and a high stern. ...read more.

Williams growing power eventually brought him into conflict with King Henry of France whose armes he defeated in 1054 and 1058. The accession of the child Philip I of France, whose guardian was William's father in law, improved his position and in 1063 William conquered the county of Maine. Upon learning that Harold had been named king of England, William secured the pope's sanction, raised an army and defeated and Slew Harold at the Battle of Hastings. The battle of Hastings was between the Normans, led by William and the Anglo-Saxons led by Harold. Hastings was the first and decisive conflict in the Norman Conquest. Many of the English nobility had fallen at Hastings, but those who survived were permitted to keep their lands. The populace did not support them as he would have hoped. Titles to the lands of the now decimated native nobility were called in and redistributed on a feudal basis to the kings Norman followers. By 1072, Edgar Athelings's adherents and their Scottish and Danish allies had been defeated and the military part of the Norman Conquest was virtually completed. ...read more.