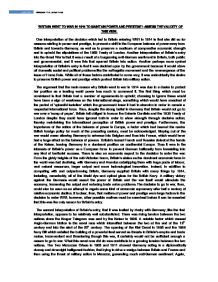 Britain went to war in 1914 to maintain power and prestige: assess the validity of this view.

'BRITAIN WENT TO WAR IN 1914 TO MAINTAIN POWER AND PRESTIGE': ASSESS THE VALIDITY OF THIS VIEW. One interpretation of the decision which led to Britain entering WWI in 1914 is that she did so for reasons relating to power and prestige, to prevent a shift in the European balance of power away from Britain and towards Germany, as well as to preserve a modicum of comparative economic strength and to uphold the stipulations of the 1859 Treaty of London. Another interpretation of Britain's entry into the Great War is that it was a result of a burgeoning anti-German sentiment in Britain, both public and governmental, and it was this that spurred Britain into action. Another perhaps more cynical interpretation of Britain's entry is that it was decided upon by the government because it would stave off domestic social and political problems like the suffragette movement and the re-emergence of the issue of Home Rule. While all of these factors contributed in some way, it was undoubtedly the desire to preserve British power and prestige which pushed Britain into military action. The argument that the main reason why Britain went to war in 1914 was due to a desire to protect her position as a leading world power has much to commend it. ...read more.

The decision to go to war, then, could also be seen as an attempt to regain some kind of economic supremacy after half a century of relative economic decline. It is clear, then, that matters of power and prestige were large factors in the decision to enter WWI; however, other possible motives must be examined before it can be asserted that this was the only reason for Britain's entry. The second interpretation of Britain's entry, that it was fuelled by rivalry with Germany, like the first interpretation, appears to be relatively well substantiated. There was rising tension between the two nations since the Kruger Telegram was sent by the Kaiser in 1896. A notable factor which caused Anglo-German friction is the naval race which intensified between the two at the end of the 19th century and into the start of the 20th century. The opening of the Kiel Canal in 1895 and the 1898 Navy Bill which entailed the building of a powerful fleet served as threats to Britain's empire and trade routes. Inconvenient and threatening though this was, it certainly would not be sufficient enough a reason to go to war. What this naval race did do was contribute to a growing tension between the two nations. ...read more.

Thus, a desire for stability in Cabinet may have contributed to the decision to enter into WWI. Furthermore, although there were many who spoke out against the notion of war before the assassination of Archduke Franz Ferdinand in Sarajevo, there was widespread support for intervention in its aftermath, which would again contribute towards the choice to become embroiled in WWI. There were, then, domestic social and political motives which pushed Britain into war, more short term than issues of power and prestige and less significant, but still having importance. It may be most prudent, then, to suggest that, while these short term domestic motives did contribute to the decision to go to war with Germany, the main consideration was certainly the issue of power and prestige. The reason for abandoning the policy 'splendid isolation' was to maintain British power as it became apparent that it could not be sustained in seclusion; as such, involvement in the war was inevitable, as Britain had to show that it was willing to intervene to protect France and Belgium to maintain prestige and honour its agreements. The domestic factors were a matter of practicality and stability; the issues of power and prestige were rooted in asserting Britain's role as a major world power and demonstrating that she was a force to be reckoned with. ?? ?? ?? ?? ...read more.