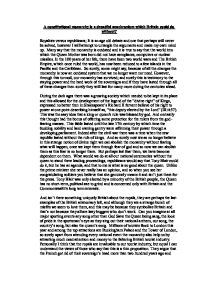 A constitutional monarchy is a dreadful anachronism which Britain could do without?

A constitutional monarchy is a dreadful anachronism which Britain could do without? Royalists versus republicans; It is an age old debate and one that perhaps will never be solved, however I will attempt to untangle the arguments and make my own mind up. Many say that the monarchy is outdated and it is true to say that the world into which the Queen Mother was born did not have aeroplanes, computers or nuclear missiles. In the 100 years of her life, there have been two world wars and The British Empire, which once ruled the world, has now been reduced to a few islands in the Pacific and the Caribbean. So surely, some might say, because of all the changes the monarchy is now an outdated system that we no longer want nor need. However, through this turmoil, our monarchy has survived; and surely this is testimony to the staying power and the hard work of the sovereigns and if they have lasted through all of these changes then surely they will last for many more during the centuries ahead. ...read more.

And isn't there something uniquely British about the royals, they are perhaps the last examples of the British aristocracy left, and although they are a strange bunch of misfits we seem to love them, and this may be because they symbolize Britain and that's not because they all are lazy buggers who don't work. Can you imagine at all major sporting events any song other than God Save the Queen being sang, the look of pride in the sportsman's eye as they sing out their national anthem, our song, the country's song, but also the queen's song. Millions of tourists flock to London this year and among the top attractions are Buckingham Palace and the Tower of London, so surely apart from attending every national event the monarchy also help us by attracting much need attention and money to the faltering British tourist industry. Personally I think that the royals are invaluable to our tourist industry, but equal I can understand the views of those who say that this is a thin proposition. They argue that the French got rid of their sovereign's head more than two hundred years ago and tourists still arrive there in much larger amounts than they do to Britain. ...read more.

And so to sum up, the republicans would say that the present system of monarchy not only denies us freedom, but it also devalues our system of government and wears down our society by maintaining outdated and damaging social attitudes. It must be the case that people would prefer a democratically elected head of state because at the moment we are left with a rather pointless institution, based upon an anachronistic concept, whose members are inexplicably given extraordinary levels of wealth, power and privilege by us, the people of Britain without any benefit to anyone but the royals themselves. However, it must be true that the people should decide whether or not to keep the monarchy and I believe that they have suddenly give it a resounding vote of confidence with their feet at the recent golden jubilee celebrations. For during these festivities so many people turned out to offer their support to the monarchy that the local authorities could barley cope. Not only this, but after the tragic loss of the queen mother, the public showed their sympathy by queuing for up to six hours to pay their last respects. And so although the public didn't put them there I believe that we want them to stay for a long time to come. ...read more.