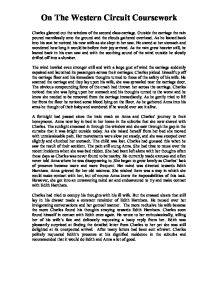 A continuation of thomas hardy's on the western circuit

Charles glanced out the window of the second class carriage. Outside the carriage the rain poured mercilessly onto the ground and the clouds gathered overhead. As he leaned back into his seat he noticed his new wife as she slept in her seat. He stared at her stomach and wondered how long it would be before their joy arrived. As the rain grew heavier still, he leaned back in his own seat and with the soothing sound of the wind outside he slowly drifted off into a slumber. The wind howled even stronger still and with a large gust of wind the carriage suddenly capsized and launched its passengers across their carriages. Charles picked himself up off the carriage floor and his immediate thoughts turned to those of the safety of his wife. He scanned the carriage and they lay upon his wife, she was sprawled near the carriage door. The obvious compounding force of the crash had thrown her across the carriage. Charles noticed that she was lying upon her stomach and his thoughts turned to the worst and he knew she needed to be removed from the carriage immediately. As he gently tried to lift her from the floor he noticed some blood lying on the floor. As he gathered Anna into his arms he thought of their baby and wondered if he would ever see it alive. ...read more.

Anna did her best to attempt to cleanse her new home for Edith's arrival but her efforts were in vain as she found herself retiring to slumber during her efforts. While Anna sat in solitude in her room and gazed out the window Edith disturbed her. Anna's appearance shocked Edith. The once radiant youngster now was noticeably paler and more frail appearing. "Hello dear mistress," Anna smiled. Edith advanced towards Anna and embraced her. "Where is Charles?" asked Anna. "I believe he is downstairs, he is preparing dinner for the both of us." replied Edith. Edith glanced around the room. It was cloaked in darkness and the only the only light that penetrated it was that from the small gap between the curtains at the window. "Perhaps you and I should take a walk in your grand garden and get out of this depressing abode?" requested Edith. Anna sighed, "Yes, I think it would do me the world of good." Whilst Anna bonneted and cloaked herself Edith retired downstairs and found herself again in the company with Charles. As Anna rummaged through her drawers a piece of paper caught her eye. She removed the paper from under a collection of Charles' garments and carried it over towards the window to take a better look at it. Even though Anna was not an accomplished she could recognise basic script. ...read more.

Anna reacted violently and grabbing the nearest utensil she could find which unfortunately happened to be the knife that Charles had just previously used to gut the fish for the dinner, lunged forward with intent. However she hit the unintended person, she meant to pierce Edith but in the commotion she mistakenly gouged Charles. Anna threw down her weapon upon realising her fatal mistake. As Charles body grew limp Edith screamed. "You evil witch, what have you done!" Edith shouted. She wrapped her arms around Charles and quietly began to rock his body athwart and quietly began to cry. Anna had returned to her bedroom again. Edith was still downstairs in solitude with Charles. Anna paced her bedroom and spotted more shreds of paper on the floor. She lifted these pieces of paper from the floor and flung them out the window and watched them as they floated gracefully through the air before landing on the ground. Anna walked towards her mahogany chest of drawers and gently closed the drawer that she had found the incriminating letters in. she stepped upon the window ledge and stared down at the drop before her. The remains of the letters blew away in the gentle breeze that was forming. And as she looked back into the room and the world that she was leaving behind her she spotted the picture of her and Charles on their wedding day and wondered what could have been. ?? ?? ?? ?? On The Western Circuit Coursework ...read more.