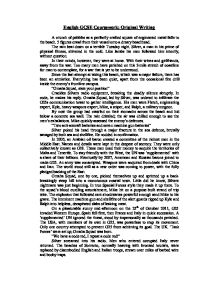 A crunch of pebbles as a perfectly crafted square of engineered metal falls to the beach. 5 figures crawl from their vessel onto a dreary beachhead.

English GCSE Coursework: Original Writing A crunch of pebbles as a perfectly crafted square of engineered metal falls to the beach. 5 figures crawl from their vessel onto a dreary beachhead. The rain beat down on a terrible Tuesday night. Silver, a man in his prime of physical fitness, shivered in the cold. Like lambs his men followed him intently, without question. In their minds, however, they were at home. With their wives and girlfriends, away from the war. Too many men have perished on this 2-mile stretch of coastline for man to contemplate, for a war that is yet to be understood. Since the last attempt at taking this beach, which was a major failure, there has been an armistice. ...read more.

He nodded in confirmation. In 2005, an Arabian oil baron created a committee of the richest men in the Middle East. Names and details were kept in the deepest of secrecy. They were only collectively known as G18. These men used their money to acquire the territories of Malta and Tenerife. To stay friendly with the West, the UN was 'supplemented' with a share of their billions. Eventually by 2007, American and Russian barons joined to make G25. An army was conscripted. Weapons were acquired from deals with China and Iran. The world stood still as a new order was coming to power, with the fully pledged backing of the East. Omaha Squad, one by one, picked themselves up and sprinted up a back-breakingly steep hill into a monotonous coastal town. ...read more.

"We have a code red, I repeat a code red!" Silver screamed into his radio. Men who entered occupied Italy never returned. The beaches of Sorrento, normally heaving with bronzed tourists, were replaced by disembodied English and Italian troops, strewn over miles of barbed wire and booby traps. Fletch waved frantically at Silver, ordering him down a quiet back street. Even at night, Sorrento was a pretty coastal town. The scars of war tore away not only its looks, but also its character and soul. This was of no concern to the remainder of Omaha; survival was the most imperative matter at hand. This was no easy feat, as they were marked men being tracked across a lonely wilderness. As morning was breaking, the pair found a deserted town house to rest. ...read more.