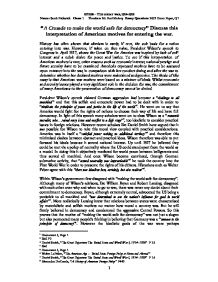 &quot;A Crusade to make the world safe for democracy&quot; Discuss this interpretation of American motives for entering the war.

"A Crusade to make the world safe for democracy" Discuss this interpretation of American motives for entering the war. History has often shown that altruism is rarely, if ever, the sole basis for a nation entering into war. However, if taken on face value, President Wilson's speech to Congress in April 1917, shows the Great War for America was inspired by lack of self-interest and a noble desire for peace and justice. To see if this interpretation of American motives is true, other reasons such as economic interest, national prestige and future security have to be examined. America's expressed motives have to be assessed upon entrance into the war, in comparison with her conduct during and after the war to determine whether her declared motives were maintained and genuine. The thesis of this essay is that American war motives were based on a mixture of ideals. Whilst economic and security issues played a very significant role in the decision for war, the commitment of many Americans to the preservation of democracy cannot be denied. President Wilson's speech claimed German aggression had become a "challenge to all mankind"1 and that this selfish and autocratic power had to be dealt with in order to "vindicate the principles of peace and justice in the life of the world"2. ...read more.

So even before the war started "they distrusted the German government, considering it unprincipled and militaristic"10. This made it easier to condemn Germany on moral grounds. This can partly explain why the US took an unofficial pro-ally bias in the first years of the war or as Ernest May calls it "benevolent neutrality"11. It was extremely tolerant towards Britain "violating every rule of international law which it believed might hinder its campaign against German imports"12 offering no meaningful resistance but holding Germany to "Strict Accountability"13. A German triumph would have affected American economic and political interests abroad and created an unfavourable balance of power. This is where the link with democracy comes in because if one democracy was threatened and fell, others might follow. So this help toward Britain can be seen as its unofficial commitment to democracy. It was debated whether national interest required an allied victory and American intervention to prevent German domination. In view of this suspicion of Germany better relations with Britain were fostered and co-operation between the two was advocated to deal with this common problem. Opposition to this came from people like Bryan who didn't believe that a German victory would endanger the US and therefore did not consider it reasonable to go to war or to compromise neutrality by siding with Britain. ...read more.

Historians such as Professor H. Barnes have argued "that far from making the world safe for democracy, the World War succeeded in putting democracy in far greater jeopardy"19. Be that as it may, its refusal to sign the treaty initially can possibly be put down to its disagreements with the harshness of the terms and a wish by the people for the government to concentrate on domestic issues more. Although some historians like Feber argue that Wilson simply "eloquently clothes the bleak skeleton of U.S self-interest in the attractive garb of idealism"20 I would disagree. There was a mixture of motives for going to war but all of them were fused with an ideological commitment to democracy and justice in the world. Indeed, Maldwyn Jones argues, "the US declared war on Germany not because American interest were threatened but because American sentiment was outraged"21. Many of the US leaders felt this way but that is also not denying the existence of other motives such as self and economic interest, national prestige and security issues. The actions of the US confirm these motives and show that the war was partly a crusade to make the world safe for democracy but also a crusade to make the world safe for America. ...read more.